World 8 is the final world of New Super Mario Bros. Mario and Luigi travel to this world after defeating Monty Tank or Lakithunder, or using the cannon in World 5. This world is divided into two parts: a "dark forest" area, and a "lava" area; both having their separate towers and castles. The bosses of this world are Bowser Jr. (fought twice alone), Dry Bowser, and a resurrected Bowser fighting alongside Bowser Jr., making up a total of four boss battles, the most of any world in the New Super Mario Bros. series.

The first half of the world has a "spooky" theme; featuring Splunkins, Scuttlebugs and Crowbers, and featuring the same music as the Ghost House levels. Notably, this is the only world to have Boos in a non-Ghost House level. The second half introduces rising lava and unique enemies such as Sledge Bros., Fire Bros., Kab-ombs, and Volcanic debris. 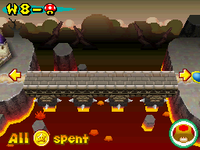 The bridge rises to allow Bowser Jr. to escape.