Big Cheep Cheeps, originally known as both Boss Basses[1] and Big Berthas[2] and later as Mega Cheep-Cheeps,[3] are large Cheep Cheeps that appear throughout the Mario franchise. Originally, they were depicted as large-mouthed and sometimes carnivorous, though these traits were later given to a separate enemy, Cheep Chomp, which took a design similar to the original starting with Super Mario 64 DS, and even uses the original English name in Yoshi's Island DS. Most later appearances simply show them acting exactly like normal Cheep Cheeps, generally passive underwater ones. Normal Cheep Cheeps are given a similar "eating" behavior in some early Mario Party games and the Game & Watch Gallery 2 iteration of Parachute. 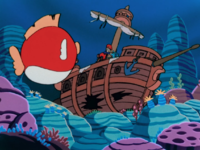 A giant Cheep-cheep ramming into the ship

In Super Mario Bros.: Peach-hime Kyūshutsu Dai Sakusen!, two abnormally-large Cheep-cheeps appear when Mario and Kibidango search for the star underwater. The first one chases after the pair mistake an angler fish for the star. It takes the appearance of a giant flat fish that puffs itself up until it explodes into many smaller versions of itself that rapidly bounce around the screen, hitting Mario six times. The second one also chases after Mario and Kibidango manage to retrieve the star from a clam, this time not as a flat fish. Mario and Kibidango swim away to a sunken ship. The Cheep-cheep rams the ship five times, causing it to also burst into smaller versions of itself, which do not hit Mario this time. This forces the sail down, making the ship begin to rise. 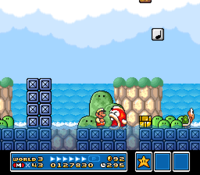 In Super Mario Bros. 3, Boss Bass and Big Bertha act as the "giant" counterpart to the jumping and swimming Cheep Cheeps, respectively. Despite gaining different names in localization, they are the same enemy.[4]

The aggressive Boss Bass (also known as Big Bass[5]) quickly swims along the water's surface in Worlds 3-3 and 3-8, trying to leap out and eat Mario if he gets too close. It defeats Mario instantly in one gulp regardless of his form. In both of the stages it appears in, the water level rises and sinks, making Mario an easy target. Throwing blocks, shells, hammers, and fireballs at the Boss Bass can defeat it, as well as tail attacks and using a Starman, but it eventually comes back. However, in Super Mario Advance 4: Super Mario Bros. 3, if the player has turned on the e-Reader card that makes enemies hit by fireballs turn into coins, and the player successfully hits the Boss Bass with a fireball and collects the coin, the Boss Bass does not return for the rest of the level.

The passive Big Bertha (also known as Mega Cheep Cheep[6]) is found swimming back and forth underwater in Worlds 3-5, 4-1, 6-9, and 7-4, carrying Baby Cheeps in their mouth, and occasionally letting them out. After a few seconds, the parent gets its baby back in its mouth, though occasionally, the Big Bertha may not retrieve its baby.

In New Super Mario Bros. Wii, their size has been reduced greatly, now only being around 1.5x as large as the average Cheep Cheep. 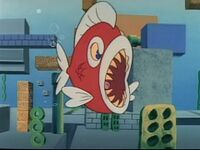 A Boss Bass from "Never Koop a Koopa".

Boss Basses make appearances in The Adventures of Super Mario Bros. 3, where they usually chase after Mario and his friends. It first appears in "Reptiles in the Rose Garden" chasing fish.

Bertha, a character influenced by the Big Bertha species, plays a prominent role in two Nintendo Comics System stories. In her first appearance, Love Flounders, she falls in love with Frog Mario after being tricked by Stanley the Talking Fish. She eventually realizes Stanley was lying, but is consoled by Mario, who states he wants to be friends with Bertha, not lovers. Bertha later reappears in Fins and Roses, this time dating Stanley. She foils Wendy O. Koopa's plans by knocking the Koopa's bomb back at her.

In the second mode of Mario Teaches Typing, Underwater World, the game repeatedly loops footage of Mario, Luigi or Princess Toadstool swimming away from either a Boss Bass or a Blooper. Their appearance is slightly different: their fins are cyan, they have several sharp teeth rather than a single blunt tooth, and have round pupils with eyebrows instead of squinting pupils. 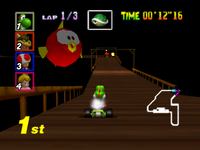 In Mario Kart 64, a giant-sized Cheep Cheep appears in Banshee Boardwalk, though it is not an obstacle. The Cheep Cheep is spawned when the player is at a certain point on the track; idling in this spot will cause it to jump nonstop until the player moves again. Mario Kart DS replaces it with a bright red Bubba.

In Mario Kart: Super Circuit, giant Cheep-Cheeps resembling their appearance in Yoshi's Story appear in the background of Cheep-Cheep Island, where they swim around and occasionally leap. They are extremely large, appearing to be about the size of a small house.

In Mario Kart Tour, Big Cheep Cheeps reappear in GBA Cheep-Cheep Island, which debuted in the 2021 Summer Tour. They have the same role as before, but now have their modern design.

“He lurks in the depths, waiting to have you for lunch.”
—Message Block in Jungle Puddle, Yoshi's Story

A Red Blurp eats a Yoshi

In Yoshi's Story, two variations of large Cheep Cheep appear in Jungle Puddle, though they are misnamed as "big Blurps" in localizations presumably due to the extremely similar-looking Japanese names. They both attempt to eat Yoshis, and can do so even if they are Super Happy. When they eat a Yoshi, they seemingly gain health, as a ♥ appears above them.[7]

Red Blurps[8][9] (also known as Red and Orange Fish[10][11] or Orange Fish[12]) act extremely similar to Boss Bass in Super Mario Bros. 3, though due to the higher power of the system they are larger and have a much higher range of direction and movement, constantly watching their prey from the water while they swim in place and leaping in a very tall and wide arc. They additionally swim after and try to eat any Yoshi that falls into the water. Compared to Super Mario Bros. 3, however, they are much slower, taking long breaks between jumps and moving slowly through the air.

Blue Blurps[13] (also known as Blue Fish[12]), on the other hand, constantly stay in the river. However, they spray water above the waterline similar to Spray Fish, but done in large bursts instead of a continuous thin stream, and like the Red Blurp, can aim their attacks in various directions. Also like Red Blurps, they will pursue any Yoshi that falls in the river.

In Mario Golf, either a Bubba or a Red Blurp will jump out of the water if the ball lands in it. They are much smaller in this game. Blurp is also the theme of Mario's Star Hole 4.

Big Cheep Cheeps reappear in the Mario Party 5 minigame Fish Upon a Star, destroying several blocks of land on contact, while temporally stunning players who risk falling off in the process. They have the same appearance as their regular counterparts from Mario Party 4. 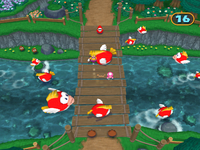 Big Cheep Cheeps appear in Mario Party 7, appearing in the Duel minigames Fish & Cheeps and Bridge Work, where they knock players into the water if they are not careful.

Mega Cheep-Cheeps also make a minor appearance in Mario Party 8. In the minigame Rowed to Victory, the losing team of boaters will be chased by a Mega Cheep-Cheep and a few Cheep Cheeps.

Mega Cheep-Cheeps make a minor appearance in Mario Party DS in the minigame Cheep Chump, where they can suck players into a whirlpool with their mouths. If a player is caught in their whirlpool, they are eliminated from the game.

Big Cheep Cheeps reappear in Super Mario Party, appearing in River Survival if the player takes the Cheep Cheep Swarms path. They jump out of the water just like their smaller counterparts, but are bigger and harder to avoid.

In Super Paper Mario, Boss Basses do not appear but are given two passing mentions in the English script. In The Underwhere, a Shayde tells another one of three stories about how he lost a life. The second story involves him falling into the sea from a pipe, but instead of drowning, he can apparently swim as well as a Cheep Cheep. However, a Boss Bass thought that since he swam like a fish, he was one himself, and the huge fish ate him. In the Japanese version, a shark is mentioned instead. The other mention of a Boss Bass is via the 77th Sammer Guy Ripper Van Fish, who mentions counting Boss Basses to sleep if spoken to after defeat.

A Big Cheep Cheep appears as a mini-boss in Paper Mario: Sticker Star, marking its Paper Mario series debut. It is encountered in Surfshine Harbor after Mario sets sail. The Big Cheep Cheep blocks Mario's access to Worlds 4, 5, and 6 as long as it remains undefeated. Comments made by various characters imply that this particular Cheep Cheep is a very rare sight especially given its size. Big Cheep Cheep's body appears to be made with a Chinese lantern.

Using the Fishhook on the Big Cheep Cheep.

Alternatively, using sharp stickers like a Spike Helmet or Thumbtack when the Big Cheep Cheep attacks during the second phase will instantly defeat it. However, it will also damage Mario for 30 HP.

If a player attempts to use any type of Infinijump before the Big Cheep Cheep hops into the ocean, its HP does not decrease lower than 20 HP and instead, the player receives Coins for every hit dealt to the Big Cheep Cheep after its health reaches this point.

The Big Cheep Cheep is one of two mini-bosses in the game that can be damaged with a First Strike. The other is the Big Chain Chomp from Chomp Ruins.

In Paper Mario: The Origami King, Mario can fish a Big Cheep Cheep out of the water in all three fishing spots. However, the Big Cheep Cheep in Shogun Studios may be revealed to be a disguised Ninji after being caught, although Mario will be given 100 coins if this happens. The biggest Cheep Cheep that can be fished is from Full Moon Island, and catching it as well as catching the biggest Blooper will reward Mario with the Fish Finder trophy. Unlike Sticker Star, its overworld sprite now has the paper outline from Mario & Luigi: Paper Jam.

Mega Cheep-Cheeps appear in the Wii version of Mario & Sonic at the London 2012 Olympic Games as obstacles in Dream Long Jump. They come down from above, hitting players if they are not careful.

Large-sized Cheep Cheeps also appear in The Legend of Zelda: Four Swords Adventures, alongside the normal size. They reside in Lake Hylia, the Desert of Doubt, and Frozen Hyrule. They charge at Link and cause critical damage to the hero.

Mega Cheep Cheep
Tribe: Aqua clan
Disposition: Glutton
Game appearances: 3
Downing Mario in one gulp
A giant Cheep Cheep that will eat Mario in one gulp. The only way to defeat it is to hit it with a fire attack or a turtle shell. You cannot step on it even when it is on the surface of the water.