Big Dry Bones (also named Super Dry Bones[1] or Mega Dry Bones) are larger versions of Dry Bones that have appeared in all four of the New Super Mario Bros. games and some of the Mario Party games. 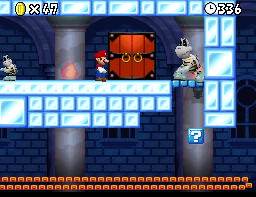 Super Dry Bones debuted in New Super Mario Bros.; jumping on a Super Dry Bones merely stuns it for a second. While stunned, the enemy's head shakes and makes a noise. Super Dry Bones can only be dismantled with a Ground Pound; the collapsing noise they make when dismantled is low-pitched (similar to Dry Bowser). After about five seconds, the Super Dry Bones comes back together. Mini Mario cannot dismantle them.

Like their smaller species, they are immune to the powers of Fire Flowers.

Big Dry Bones appear in New Super Mario Bros. Wii. They are highly resilient to being frozen by ice balls, as they break free from the ice the instant they are frozen. They are also defeated upon touching lava.

Big Dry Bones also appear in Mario Party: Island Tour. They appear on the third and fourth Star Stages of the Star-Crossed Skyway board. They give out seven Mini Ztars.

A Big Dry Bones, known as Mega Dry Bones, appears in Mario Party: Star Rush as a boss. In his minigame, Mega Dry Bones's Femur Fever, players need to Ground Pound the platform they are standing on to launch a cannonball at him. Each Ground Pound lights up one light out of three. If all three are filled, a cannonball is launched. If the Ground Pound is done at the peak of their jump, then two lights are lit up instead of just one. The more allies on a player's team, the faster they can launch cannonballs. Mega Dry Bones can also attack by throwing a bone that goes through each players' platforms in a straight line starting at either Player 4 or at Player 1. When Mega Dry Bones' health bar goes past the halfway mark, the bones he throws are now on fire and he attacks more frequently.