It has been requested that more images be uploaded for this article. Remove this notice only after the additional image(s) have been added. Specifics: Needs an image in Super Mario-Kun 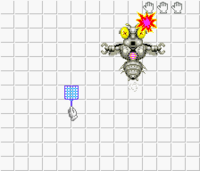 King Watinga[1] is a large, robotic fly. He is the boss of the minigame Gnat Attack in Mario Paint, where he appears at the end of each level, as well as Super Mario Maker, where he only appears in the third and final level. In Mario Paint, King Watinga is capable of flight, spawning Fly Children, and shooting out stinger missiles, while in Super Mario Maker, he only spawns Fly Children and flies off-screen, returning when all the Fly Children are swatted. In Mario Paint, he turns slightly red after taking 10 hits from the flyswatter, and turns redder after taking 15 hits. After taking 20 hits, he convulses and explodes.

Following the release of the version 1.20 update for Super Mario Maker, King Watinga can also appear on the level editor screen if a Muncher is shaken after flies have already spawned. Angering him by swatting him repeatedly will start a more challenging mode of Gnat Attack. Two King Watingas appear in the final level of this mode.

King Watinga's only other game appearance is in a remake of Gnat Attack called Fly Swatter, a minigame that appears in WarioWare, Inc.: Mega Microgame$!.

King Watinga also makes a small appearance in volume 5 of Super Mario-kun, in which he is brought out of the Mario Paint game by Lemmy. After colliding with Yoshi, King Watinga fuses with him to become Hae Yoshi. In the end, he is destroyed, and Mario is able to redraw Yoshi.