Goomba Towers, also known as Goomba Stacks[1], are Goombas stacked on top of each other that first appeared in Super Mario 3D Land. They behave similar to the Dangos in Super Mario Sunshine.

Goomba Towers attack in Super Mario 3D Land by running at the player and attempting to hit them in a similar fashion to individual Goombas. Goomba Towers can be shortened or defeated depending on how many Goombas the stack has. For example, attacking a stack of four will reduce it to three, and so on. Alternatively, they can be defeated all at once with a Ground Pound or as Statue Mario. They can be defeated one-at-a-time by being jumped on, being hit with a fireball or boomerang, being hit with Tanooki Mario's tail or being hit while Mario is invincible.

Three Goomba Towers are seen in Peach's Letters. Two try to attack her when she attempts to escape, but she defeats one with her parasol (apparently getting a 1-Up in the process). Another Goomba Tower is later seen chasing Peach with Bowser and his other minions. During the credits, Bowser is seen on top of a massive Goomba Tower, trying to reach Mario, who is carrying Peach home in his Tanooki form, though the tower falls over due to Bowser's weight.

Goomba Towers reappear in New Super Mario Bros. 2, and can be defeated by the same methods as before. They can be affected by the Gold Ring, where they function the same as Gold Goombas.

They first appear in World 1-1, where the first one appears before the Checkpoint Flag, and two more appear right in front of the Goal Pole. If Mario defeats Goombas in a Goomba Tower without fully defeating the tower, and then walks offscreen, the Goomba Tower will go back to the original number of Goombas.

A Goomba Tower in the Wooded Kingdom.

Goomba Towers reappear as enemies in Super Mario Odyssey. They can be found in most of the kingdoms in the game. This is their first appearance in a more sandbox-styled 3D game. If Mario captures a Goomba and jumps on other Goombas, he can make and control a Goomba Tower himself. Captured Goomba Towers are required to activate Goomba buttons. Additionally, Goomba Towers can be used for collectibles impossible to reach otherwise, such as regional coins or Power Moons in a high place that are unobtainable in Mario's regular form. Unlike most other enemies, Goomba Towers do not get dazed when Mario uncaptures them.

The maximum number of Goombas there can be in a Goomba Tower legitimately is 30. This can be done in the Darker Side, in the area with the Yoofoe. The game itself can actually handle up to 200 Goombas in a stack before the Nintendo Switch crashes.[2]

A Goomba Tower and a Goomba in the Goomba Spotting minigame.

Goomba Towers appear in Mario Party 9 in the Goomba Spotting minigame, where players attempt to count the total number of Goombas that run across the screen as accurately as possible. Sometimes, Buzzy Beetles appear in the tower to trick the players into tallying them.

Goomba Towers appear in Mario Party: Island Tour. One Goomba Tower is the first boss of the Bowser's Tower mode, being fought on the fifth floor, and its boss minigame is Goomba Tower Takedown. Another appears in the board Perilous Palace Path, and determines whether the player takes the main path or the Bowser Zone.

Only one Goomba Tower appears in Mario Party 10, on the Mario Board in amiibo Party.

In Paper Mario: Sticker Star, five Goombas appear in Bouquet Gardens and stack together as a Goomba Tower to bend into a wheel as part of their dramatic entrance to attack Mario and Kersti. The battle against them has Kersti demonstrate to Mario how the Battle Spin works. Afterwards, the five Goombas are defeated in battle and subsequently surrender.

In Paper Mario: Color Splash, a group of five Goombas go into a Goomba Tower before becoming a Goomba Wheel in Sacred Forest, similar to Paper Mario: Sticker Star.

Goomba Towers reappear in Mario Kart Tour, exclusively appearing in the "Goomba Takedown" challenges. Hitting one of the Goombas with an item will cause them to fall, as will driving into them. They are awarded a number of points equivalent to the amount of Goombas in the stack.

Goomba Towers return in Captain Toad: Treasure Tracker and its Nintendo Switch and Nintendo 3DS ports, acting the same as they did in Super Mario 3D World.

Goomba Towers are one of the enemy species for Goombas in Puzzle & Dragons: Super Mario Bros. Edition. There are 2-Goomba Towers and 3-Goomba Towers, and appear when a Goomba ally is transformed into a Goomba Tower by using a certain amount of Goomba Coins.

At the point in Mario & Luigi: Paper Jam in which Paper Mario is introduced, a group of Paper Goombas led by the Crinkle Goomba form a Goomba Tower to take the form of a Goomba Wheel, similarly to Paper Mario: Sticker Star.

Goomba Towers appear as recruitable allies in the Minion Quest: The Search for Bowser mode in Mario & Luigi: Superstar Saga + Bowser's Minions, after being absent in the original game. They are first encountered in Goombas Unite. Goomba Towers are melee troopers, and they attack by running into enemies. Their special attack, Whomping Wallop, allows them to slam the ground, damaging all enemies in front of them, similarly to Mario Party: Island Tour. They are weak against Boomerang Bros and Beanerang Bros. Goomba Towers always appear in stacks of three.

Goomba Towers appear as obstacles in BMX Plus in the Nintendo 3DS version of Mario & Sonic at the Rio 2016 Olympic Games. They appear in both stationary and moving variants, however both have the same effect of causing a character to lose speed and Rings when hit. After they have been hit by a character, the stack will fall over and will no longer be an obstacle.

In Mario Sports Superstars, Goomba Towers appear in the Road to Superstar mode as enemies for the player's amiibo card balls to take down. They sometimes have a lost projectile on their head, and can be seen with Bone Goombas on them as well. 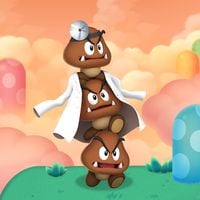 A Goomba Tower appears as a playable doctor in Dr. Mario World under the name Dr. Goomba Tower, released on April 26, 2020. Dr. Goomba Tower is available as a special stage reward in World 22. In stage mode and versus mode, Dr. Goomba Tower's skill is to target several locations to be eliminated, which is represented by the stacked Goombas wobbling before losing their balance where the individual Goombas falling down. The amount of targets is 10 spots in stage mode and 6, 12, 18, 24 and 30 targets in versus mode at level 1 to 5 (3, 5, 7, 10 and 15 respectively prior to season 7 in versus mode). When using this skill, at least one object is guaranteed to be targeted for being eliminated, while the rest are random. This skill will not target any unclearable objects, such as cages or Empty Blocks.