In New Super Mario Bros., Deep-Cheeps and their larger variants, the Mega Deep-Cheeps, only appear in World 6-5. They swim in a wavy pattern, but if approached, they move up or down toward Mario or Luigi until he passes them.

In New Super Mario Bros. Wii, Deep-Cheeps are slightly more common. One appears in World 1-4 along with a Mega Deep-Cheep. If Mario and co. keep staying in the area, another pair of green fish enemies appears. Deep-Cheeps can also be encountered in the second part of World 8-4.

In this game, their lips have become pink, matching the current depiction of a Cheep Cheep's, rather than keeping the red-orange colored lips they and Cheep Cheeps previously had in New Super Mario Bros. Their dorsal fins and tails have also become yellow, as opposed to white. There is a more relentless enemy similar to Deep-Cheep known as Spiny Cheep Cheep.

In Mario Party 9, a Deep-Cheep can be seen swimming around Blooper Beach. It jumps out of the water at various intervals and may even jump over the player's vehicle. It has no effect on the gameplay.

A Deep Cheep in Minecraft

In the Super Mario Mash-up in Minecraft, normal Cod fish are reskinned to be Deep Cheeps.

In Dr. Mario World, Deep Cheeps appear in the background of World 18 once an area has been cleared. 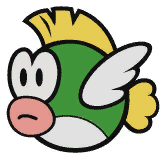 The Paper Mario series has also featured green Cheep Cheeps that are not Deep Cheeps.