“You may have made it this far, but the Mini Stars are mine!”
—Bowser, Mario Party 9

Bowser Station is the sixth board featured in Mario Party 9, and the final stage in the Solo mode. The default vehicle here is the Space Scuttle. In the Museum, the player can purchase the Shiny Saucer and the Starship Bowser vehicles. The mid-boss is Bowser Jr., and the boss is Bowser himself. It is very similar to Bowser's Warped Orbit, as both boards are owned by Bowser and are in space. If playing in Solo Mode, the player plays against two of Bowser's minions, Shy Guy and Kamek (Magikoopa). This is the only board along with DK's Jungle Ruins to not feature Event Spaces or to allow the player to choose the boss and mini-boss in Party Mode. In this board, the mini-boss is always Bowser Jr. and the boss is always Bowser.

When reaching this board in Solo mode, Bowser notices where the player is going and prepares to send more minions after them, but soon realizes they are headed right where he's waiting, and decides to take matters into his own hands with Bowser Jr. 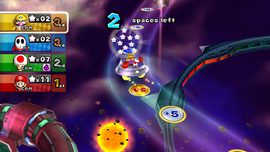 Players in the board attempting to collect Mini Stars.

The board is a circular board like the ones featured in past Mario Party games. There are two ways to earn Mini Stars on this board: by running into them, or by earning them from the Jackpot Machine. The machine's Mini Star total increases whenever the player lands on Jackpot+ Spaces, a space that is exclusive to this board. When landed upon, the Jackpot Machine's total Mini Star count increases by an amount equal to the number shown on the space. Once the number on the machine reaches at least 20, a minigame starts to determine which player earns all the stars. Players may also earn them by landing on a Jackpot Space, which automatically gives the captain all the Mini Stars in the Jackpot Machine. By default, the machine has six Mini Stars, and sucks up one more than that when all the Mini Stars are removed from it.

The mid-boss for this stage is Bowser Jr., who is faced in the minigame Bowser Jr. Breakdown. After this, Bowser appears on the stage with his Koopa Clown Car and challenge the player himself, creating a Boss Battle Space and Bowser Gate at the beginning of the stage.

Also, on the "Almost There!" event, Bowser forcefully turns several spaces into Bowser Spaces, instead of asking the captain if they want "a WHOLE BUNCH of presents". Four of these spaces appear in the last six spaces of the board, along with a Jackpot Space and a Back Space right before the Bowser Gate; this combination almost guarantees that the players have at least one meeting with Bowser on their way to the end of the board.

After the Bowser Gate is reached, the players face Bowser in the game Bowser's Block Battle. Once he is defeated, the players earn the Mini Stars back, and they are set free.

The characters ride a space ship on this board. The vehicle available as soon as the board is unlocked is the Space Scuttle. The Shiny Saucer and Starship Bowser can be purchased at the Museum for 200 Party Points each.

In this Captain Event, all players but the captain roll one dice with red, green, and blue hearts on them. The captain then rolls the same Block three times. If what they get matches another player's, both the captain and that player receive two Mini Stars. If there are less than four players, Mechakoopas fill the open spaces, ensuring that there is always be three players for the captain to match.

Sometimes, Bowser Jr. arrives after the captain rolls, forcing everyone to roll their Dice Blocks again. Afterwards, he would roll his own Dice Block and give two Mini Ztars to anyone whose color matches his.

In this Captain Event players roll Dice Blocks numbered 1-10 in an order determined by the captain, and the number that appears is lit up on the bingo board. Once a player gets three-in-a-row in any direction, they receive three Mini Stars times the number of lit spaces.

Sometimes Bowser shows up and changes the event into Dark Bingo Colony. He replaces the Mini Stars on the board with Mini Ztars, so that the player who gets a bingo loses Mini Stars equal to three times the number of lit spaces.

In addition, the board consists of only the numbers 1 through 9, which means rolling a 10 does not affect the board.

In this Captain Event the captain assigns each player a track, and they race to reach the goal first. The tracks vary in length, although the longer ones have Dash Spaces and Mini Stars along the way. Players roll Dice Blocks and move simultaneously. The event ends when a player reaches the end of the track and obtains the 10 Mini Stars waiting there. As the players move simultaneously, it is possible for more than one to win the race, in which case they all receive the 10-Mini-Star prize.

Bowser may also appear and force a player to use a 1-2-3 Dice Block or a 0-1 Dice Block instead of the standard 1-6 Block.

Players fight Bowser Jr. on a space station in Bowser Jr. Breakdown. Players roll Dice Blocks to try and get the gauge to reach a multiple of 3. The player who does so attack, and the meter restarts. If the player reaches a multiple of 3, they get that many points, and so do opponents. The meter goes up to 15, and halfway through the mini game, two spaces on the meter become Bowser Jr. spaces, and if the player or an opponent lands on one of these spaces, Bowser Jr. gets to roll. The sum of dots in the dice roll is the number of times Bowser Jr. pounds the player, taking away that many points.

Bowser is fought on a platform out in space in Bowser's Block Battle. He is giant during this battle, and players try to damage him by tossing the Dice Blocks he throws onto the arena. The dice that show the players' faces are converted to energy balls that they can shoot at Bowser, which are then converted into points.