“Welcome to Windmillville! The only way to get Stars here is by purchasing windmills. It's easy as crumpets! Stop by a windmill and deposit some coins. Whoever makes the largest deposit becomes the owner of that windmill. Once you own a windmill, you get any Stars that come with it. But if a rival put up more coins later... He'll take over your windmill and steal your Stars! It's a travesty, I say! But don't give up the ship! You can still get your windmill back... Just deposit more coins! If you put in the most, you'll be the new owner. Oh, bother! I almost forgot! Some windmills contain more Stars than others... So mull over which ones are really worth the money, and then spend coins accordingly!”
—Toadsworth, Mario Party 7

Windmillville is a Netherlands-themed board in Mario Party 7. Here, Koopa Shepherdesses are in charge of the Orb Shops, windmills and attractions. The goal of this board is to obtain as many Stars as possible through the purchase of windmills. The owner of each windmill gets a specific number of Stars (these are taken away if the windmill changes owners). Each of the four red windmills are worth one Star, the green windmills located at both corners of the stage are worth two Stars each, and the big yellow windmill located in the center of the board is worth three. To take control of a windmill, a player must have the greatest number of coins invested in it. Players are given the option to deposit coins into a windmill whenever they pass by it on the board, and a windmill – along with the Stars inside it – is owned by whoever has deposited the most coins in that windmill. There is a fixed and limited number of attainable stars on this board. When all windmills are under ownership, the maximum number of stars available is 11. A variation of this mechanic was later reused in a Mario Party 8 board, named Koopa's Tycoon Town.

The stage itself is full of interchangeable paths that shift every time a character passes through paths of special tulips. A character can also choose to ride a floating flower for ten coins. This transports the character to one of several random spaces on the board.

In Solo Mode, the winning condition is to be the first to get three stars from repairing three windmills. The red ones cost 20 coins to repair, the green ones cost 30, and the big yellow one costs 50. 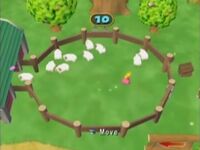 Peach in the sheep pen, trying to get coins from sheep.

On this board, due to a special stipulation, duels cannot bet stars via Duel Spaces. The loser can only give coins to the winner, depending on the wheel as usual (10 coins, half of all coins, or all coins). Also, Donkey Kong (from the DK Space) can only reward the winners of his mini-games (via single player DK minigames) with coins (depending on the result of his wheel; 20 or 30). Similarly, Bowser (from the Bowser Space) can only steal coins if the player loses on single-player Bowser minigames.

When Bowser Time comes along, Bowser can do one of three things: