Bandits are the tall, larcenous relatives of Shy Guys. Bandits originated from the Yoshi franchise, although they have gone on to appear in the Paper Mario, Mario & Luigi and Mario Party series as well. As their name implies, their common trait throughout the games is to steal from the player, whether it be coins or Baby Mario.

Three Bandits, with one of them wearing a Yoshi mask. 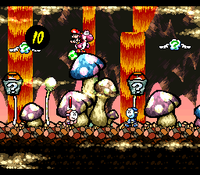 Both colors of Bandits in The Cave of the Bandits

Bandits, along with Shy-Guys, are some of the most common enemies in Super Mario World 2: Yoshi's Island, where they come in two colors. The blue ones wander around until they spot Yoshi and Baby Mario, then give chase. If a Bandit successfully catches Yoshi, it takes Baby Mario and runs away. They can run very fast and jump on top of small ledges, making them a versatile foe. It takes six eggs (or watermelon seeds), three stomps, or a Ground Pound to dispatch them. The first three times a Bandit is hit with an egg, it drops a coin; the next three hits give extra lives. Yoshi can also use his tongue to push them back, but he cannot eat them. Sometimes they hide behind rocks, mushrooms, or cave walls, only coming out to steal Baby Mario if Yoshi gets damaged nearby or uses his tongue on one while it's hiding. Additionally, there are Winged Clouds that uncommonly contain a Bandit. In two levels, they summon Itsunomanika Heihō to replace Baby Mario while the Bandit takes off. However, that can be foiled if the Itsunomanika Heihō is eaten or egged first. In one instance, they even parachute from Baron von Zeppelins.

A less-common pink variant, also known as Coin Bandit,[1] is always seen carrying red coins. The Coin Bandit usually flees from the Yoshis, but if the Yoshis manage to snatch the coin and/or use their tongue or Green Watermelon seeds on the Bandit, it will start to chase them like a normal Bandit. However, if Yoshi grabs the coin without touching the Bandit, it will continue to act as though it is holding it. Other variants of Bandits originate from this game, including Green Gloves, Grunts, Sluggers and Zeus Guys.

In Yoshi's Island DS, Bandits only appear on land, and are the only enemies to take off with the babies. Bandits will jump very high when they notice a Yoshi, but they will not jump when they reach a ledge. Bandits can be viewed in the Land Enemies exhibit in the Island Museum.

Bandits reappear in Yoshi's New Island, acting the same as in previous appearances. They appear in blue and red, with the latter being analogous to the pink type from before. If they are stuck below Yoshi, they will continuously jump. They are also featured abundantly in a level named after them, called Bandit Valley.

A Bandit as seen in the Super Mario: Yoshi's Island manga.

Bandits appear in the manga based on Super Mario World 2: Yoshi's Island. 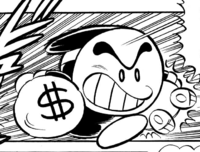 Bandit, as seen in Super Mario-kun

A Bandit appears in the Japanese manga series Super Mario-kun. Bandits' first appearance is in volume 14, which is based on Super Mario World 2: Yoshi's Island.

Pink Bandits are common enemies found in Dry Dry Desert in Paper Mario. They sometimes fight alongside Pokeys or others of their kind and mostly come in packs. They can dash very quickly toward Mario, trying to steal his coins and hurt him in the process. If Mario fails to perform the defensive Action Command, the Bandit steals a certain amount of coins from Mario and runs away from battle as soon as possible. However, if Mario defends himself, the Bandit will get no coins and will have an embarrassed face. Mario can recollect his coins by damaging or defeating the Bandit(s) who stole them.

Blue Bandits do not appear in the final game, though graphics for them are unused in the data. 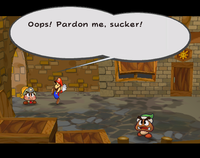 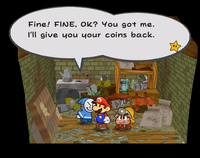 Blue Bandits commonly appear in Rogueport in Paper Mario: The Thousand-Year Door. During Mario's first foray into the town in search of Professor Frankly, a Bandit zooms by Mario, stealing half of his coins and leaving him dizzy. Mario is able to track the Bandit down to a house near the market and retrieve his coins. Several other Bandits live in Rogueport, namely Larson, Swindell and Eddy the Mask.

Pink Bandits make rare appearances as enemies. They do not move as quickly as those in the previous game. They now get a disappointed frown if Mario or his partner defends themselves with the Action Command, or if a successful attack does not steal any coins (which can occur rarely). A team of Bandits known as the Hand-It-Overs, consisting of two Bandits and two Big Bandits, are fighters in the Glitz Pit. One of the Big Bandits, Bandy Andy, is very interested in rumors about the Glitz Pit, and is eventually caught by Grubba, leading to the Hand-It-Overs team disappearing from the roster along with the KP Koopas. They are replaced by the Wings of Night and the Destructors for the rest of Chapter 3. Bandits also appear in the Pit of 100 Trials in the Rogueport Sewers, along with Badge Bandits. 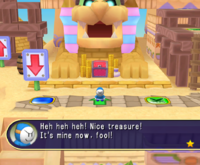 A Bandit seen in Mario Party 7.

A Bandit appears in Pyramid Park of Mario Party 7, but only in Solo Cruise. It stole a Star from the Bowser Sphinx, and the player's goal is to get the Star back from the Bandit with a Chain Chomp and return it to the Bowser Sphinx. There is also a Bandit Orb that is exclusive to the board Windmillville; whoever lands on a space it is applied to will have their money taken out of their windmill and given to the character who owns the space.

A Bandit seen in Mario Party 8.

In Mario Party 8, a Bandit appear in Shy Guy's Perplex Express, walking around one of the train wagons. When a character lands on a Green Space above the train, a Shy Guy will appear, revealing that a Bandit (or Mowz) has robbed Holly Koopa's Candy.

A Bandit also appears in Koopa's Tycoon Town. If a certain ? Space is landed on, a Bandit will appear in an alley and steal coins from an opponent's investment in the nearest hotel. If enough is stolen, the hotel will be forced to downsize, causing the owner to lose a star.

Bandit is also one of the competitors in Moped Mayhem.

Bandits reappear in Mario & Luigi: Dream Team as enemies. They are regular enemies on the path to the Dozing Mattress in Dozing Sands. In the field, Bandits throw bandaged smoke bombs at Mario and Luigi upon spotting them, and then chase them briefly. In battle, a Bandit may throw two smoke bombs, one that is closer to the enemy side of the battlefield, and one that is closer to Mario and Luigi. The Bandit and all other ones (if any) will then, one by one, sneak through the smoke and come out the second smoke cloud to charge at a brother.

If the Bandit is looking at the background when it is momentarily visible while moving between smoke clouds, it will attack Mario; if it is looking at the foreground, it will attack Luigi. If a Bandit hits either Mario or Luigi with this attack, they will steal a maximum of 100 coins and could give the bros. the trip status effect. At the end of the attack, the Bandits will line up in the middle of the screen and show whether they got any coins or not. They will then all jump high into the air to shuffle themselves amongst each other before falling back into position, forcing the Bros. to guess which Bandit to target to get their coins back. A Bandit will flee on the next turn if carrying 100 coins unless the player defeats it to reclaim the coins.

Bandits may also attack individually by approaching a brother, pulling out a smoke bomb, and throwing it where they stand. It will then either run out of the smoke in order to tackle the targeted brother, or will send out a cardboard Bandit on a string with a bomb tied behind it. Mario or Luigi must smack the real Bandit when it comes out; hitting the cardboard copy will result in the bomb exploding, damaging the target and possibly leaving them dizzy.

Bandits also appear as a background enemy in Somnom Woods — however, in this appearance, they carry a Golden Egg. Due to running away when hit with a Taunt Ball, they cannot be defeated, but they do drop the Golden Egg they are carrying, which can be brought into the battlefield if Mario or Luigi hit it with their hammers as it bounces by.

A Shy Guy Airtub may assist the Dozing Sands Bandits in battle by appearing as a background enemy.

Even though Bandits do not appear physically in Mario & Luigi: Paper Jam, their name sometimes appears as a wrong answer for identifying a certain enemy in the Toad quizzes.

Bandits appear in Mario & Luigi: Superstar Saga + Bowser's Minions, where they are enemies and recruitable allies found in Minion Quest: The Search for Bowser. They are ranged troopers, and attack by throwing explosive cardboard Bandits, similar to the ones from Mario & Luigi: Dream Team via their Throw the Fight skill. Bandits are fast, but have low power.

Bandits reappear in Mario & Luigi: Bowser's Inside Story + Bowser Jr.'s Journey, where they are enemies and recruitable allies found in the Bowser Jr.'s Journey mode. They behave the same way as in Minion Quest: The Search for Bowser. If there are more than one of them, their Throw the Fight skill will have a giant explosive cardboard Bandit. They are weak against Purple Para-Biddybuds.

A Bandit appears in Super Smash Bros. Ultimate as a spirit, using its artwork from Yoshi's New Island.