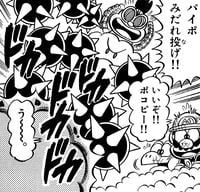 Spiny Surge is one of Lakilester's attacks in the game Paper Mario. When used, he throws many Spiny Eggs at all of the enemies. All the player has to do to get the best effect is repeatedly tilt the control stick to the left to fill the gauge. Spiny Surge is an initially available attack that costs four FP.

Lakilester uses this move in Super Mario-Kun when he is facing Huff N. Puff.