Not to be confused with Miss T. 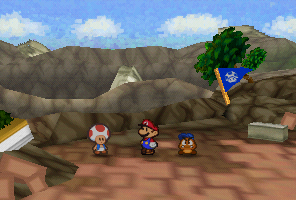 Muss T., where Peach's Castle used to be

Muss T. is a Toad who is seen standing by the gaping hole where Peach's Castle used to be in Paper Mario. "Muss T." is a pun on the word "musty". A letter can be delivered to him in the game, but other than that, he has no real purpose.

Muss T. was once fishing friends with Goompapa, Koover and Fishmael. He enjoys walking in the castle gardens, and admits to missing the usual bustle around Peach's Castle.

When Mario and his partners use the Star Ship to travel to Bowser's Castle, Muss T. believes the ship to be a shooting star and makes a wish that he wants to see the princess.