This article is about the minigame in Paper Mario. For the move in the Super Smash Bros. series, see Smash attack (move). For the move also known as a Smash Attack, see Ground Pound. 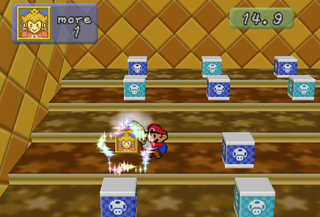 Mario finding a Peach Panel in the minigame Smash Attack

Smash Attack is a minigame found in the Paper Mario Playroom, at the southern part of Toad Town. In order to access this game, the player must have the Gold Credit card by giving Koopa Koot a Life Shroom in one of his favors. The time limit for this game is thirty seconds and costs ten coins to play.

The objective of the game is to smash the boxes with the Hammer and get ten Peach Panels before time runs out. However, there are some obstacles, such as Fuzzies and Bob-ombs. If the player runs into a Fuzzy, the player will have to tap

to get it off Mario's head, like in battles. If the player runs into a Bob-omb, it will explode, and they will lose about one second in time. If the player wins, the remaining time will be multiplied by ten and that will be the number of coins Mario will receive.