Spiny Tromps are large, spiked orbs with a surly face; they resemble a circular Thwomp. Their name is likely derived from "trample", referring to their attacks, and "Thwomp". Though they are not named in their first appearance, Paper Mario, they are later named in Super Paper Mario. "Tromp" itself is also a slang word that can mean either "trample" or "ultimately destroy".

Mario and Goombario, being chased by a Spiny Tromp in Paper Mario

Spiny Tromps first appear in Paper Mario, where they are found inside Mt. Lavalava. In a corridor of Mt. Lavalava, a Spiny Tromp appears to try to crush Mario, which can only be avoided by using Bow's intangibility powers or by outrunning it using the Spin Dash move.

Later, another Spiny Tromp, after having its path cleared by Mario and his Ultra Hammer, rolls haphazardly towards Mario. Mario once more needs to either outrun it with the Spin Dash or use Lady Bow's ability to make himself intangible to avoid the rolling Spiny Tromp. The Spiny Tromp continues to roll and crush the nearby Kolorado before breaking through a nearby wall and embedding itself in another wall, clearing Mario's path. Mario will lose 1 HP if he is hit by either Spiny Tromp.

Despite their absence from Paper Mario: The Thousand-Year Door, several Spiny Tromps appear in Super Paper Mario as obstacles in the Mount Lineland and Underwhere Road, where they are shown to come in varying sizes. To dodge these Spiny Tromps, Mario needs to jump over them or Flip, which reveals that Spiny Tromps are actually rather thin and composed of three layers of a spiked, cardboard-like substance, so they can still harm Mario while in 3D. Unlike in Paper Mario, their eyes constantly look in front of them instead of at Mario. In Underwhere Road, if the player triggers the cutscene with Dorguy the Third while any Spiny Tromps are nearby, they will be instantly defeated.

A small variant of Tromps, referred to as Spiky Tromps, also appear later in Super Paper Mario, in Yold Ruins, where they often act as obstacles. 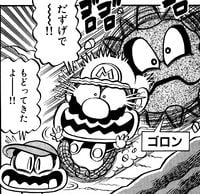 A Spiny Tromp appears in the Paper Mario adaption of Super Mario-Kun specifically in volume 26, but it also is the first chapter of the English-translated collection, Super Mario Manga Mania. After Mario is energized from Sushie's water (which she claims is an energy drink), Mario runs toward it, only to get chased by a Spiny Tromp. It chases Mario, Goombario, and Kooper. Kooper tries to stop it by trying to act like a dung beetle, by rolling it with his hind legs, but gets crushed. Sushie, however blasts it with water, destroying it.