“Just check this thing out! This bad boy is sporting the latest in brobotics!”
—Mr. L, Super Paper Mario 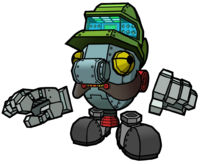 Brobot L-type is the improved version of Brobot, Mr. L's robot in Super Paper Mario. It has been upgraded with hands and feet.

In Chapter 6-1, after the Sammer's Kingdom gets destroyed by The Void, Mr. L appears in the World of Nothing and takes the now-stone Pure Heart. Though he tries to leave, he is convinced to stay and fight, summoning the Brobot L-type. In addition to the arms and legs, the Brobot now is able to inhale and pull in the player, shoot lasers from its eyes, fire rocket punches, ground pound, and fire its mustache like a boomerang.

Despite being an improved version of Brobot, the L-type has less HP, however this is due to the nature of the two battles: the original robot is fought using Squirps' laser fire, which is much more damaging than normal attacks, necessitating a greater amount of HP. Its attack and defense have been increased by one, however.