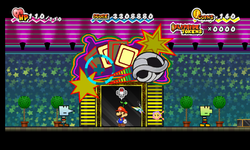 The Flipside Arcade is an arcade located in The Underwhere, a bar in Flipside. It is accessible through a golden Warp Pipe in the back room of the bar, which can only be entered while Flipping as Mario. The arcade is run by The InterChet.

In the arcade, the character can play four different minigames (one being unlockable) and set high scores. Except for the unlockable minigame, Hammer Whacker, each minigame costs 10 Flipside Tokens to play. Flipside Tokens can be bought from The InterChet for three Coins each, and earned after playing minigames, which can be traded in for items that the character may not find commonly outside the Flipside Arcade.

If the character flips in The Overthere bar in Flopside, they can find two chests instead of the gold pipe, making the arcade the only place in Flipside not existing in Flopside.

Main article: Forget Me Not

Forget Me Not is a simple matching minigame in which the player must match cards together with the Wii Remote pointed at the screen. There are also items within the game that may help the player win the round.

Mansion Patrol takes place in what appears to be the Foyer of Luigi's Mansion. Once again, with the Wii Remote pointed at the screen, the player has to shoot down as many Boos and Dark Boos as they can without the Boos coming too close to the screen. The player receives an item if they rescue a Toad from a Boo.

Tilt Island is a minigame where the player has to tilt the Wii Remote to rock the platform to make the character on top of it avoid the falling enemies. The objective is to collect a certain number of items to pass the round.

Hammer Whacker is a secret minigame and can only be played with the Golden Card found in The Overthere bar in Flopside. It costs 20 Flipside Tokens to play. In the game, a Koopa Striker kicks a certain number of shells each round towards the character, who must whack them with the hammer by swinging the Wii Remote downwards.

Below is a list of the prizes that can be redeemed for Flipside Tokens.