Dull Bones are a yellowed variant of Dry Bones found in the Paper Mario series. 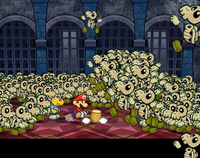 In Paper Mario: The Thousand-Year Door, Dull Bones are weaker than Dry Bones and appear commonly in Hooktail Castle, appearing among many identical lifeless piles. Dull Bones attack by throwing bones at Mario and his partners. Despite having very low HP, their defense power makes them slightly harder to defeat. Still, they are easily taken out by simply using the Hammer. Using a POW Block or Koops’s Power Shell is also very efficient, especially when there are many Dull Bones in battle. Unlike Dry Bones, they cannot reassemble once they are smashed. However, Dull Bones can construct other Dull Bones to help in the fight. A subtype of Dull Bones, the Red Bones, appears as a miniboss here and summons an enormous horde of Dull Bones to repel Mario, though these are not fought in the typical way and instead must be pushed through. Three of them later appear in the Glitz Pit called the Dead Bones. One is also in the Riddle Tower as the weakest Dry Bones-esque enemy, which must be defeated first. They also appear in the first ten floors of the Pit of 100 Trials. 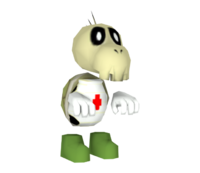 In the game files for Super Mario Strikers, there is an unused model of a Dull Bones medic, which would have marked the enemy's first 3D appearance.[1]

Other appearances and references[edit]

Several Dull Bones make a cameo appearance in the Nintendo Monopoly board game.