Grubba is a Spike wrestling manager and fight promoter at the Glitz Pit and a major character in Paper Mario: The Thousand-Year Door. A champion wrestler and martial artist in his younger days, Grubba retired as a fighter to become Glitzville's famous fight promoter when he meets Mario; he claims to be past his prime, yet Bandy Andy observes him to be in good shape in spite of his years. Initially presented as an uninvolved third party in Mario's battle with the X-Nauts for the Crystal Stars, Mario eventually discovers that Grubba possesses the Gold Star, and had been using it to drain other fighters of their strength. Grubba is then revealed as a callous egotist underneath, and Mario fights his enhanced alter-ego, Macho Grubba, as the boss of the game's third chapter.

According to Grubba, in youth, he was poor, but he did not care for "fancy, big-city ways." His worldview changed when he became a martial arts fighter. Though some of his moves were made illegal as he progressed, he became recognized as a champion fighter and earned enough money to survive off of for the rest of his life. At some point, Grubba attained the Gold Star, a Crystal Star with the ability to increase one's power by enabling its possessor to use Power Lift. The details behind Grubba's ownership of the Star are never explained. Wonky's tales present a slightly different account of Grubba's rise, labelling him a "mediocre fighter" until he found the Gold Star.

Grubba's power-draining machine allows him to transfer the energy of others to himself.

Over time, age deteriorates Grubba's ability and he is forced to retire from fighting. However, Grubba opens his own fighting ring, the Glitz Pit and becomes its promoter. The Champ's Belt, the reward for the champion of the Glitz Pit, features an imitation of Grubba's Gold Star. Desiring to regain his fit, youthful body, he develops a power-draining machine that uses the real Gold Star as a power source, which can transfer power from one person to another. Additionally, the machine makes him appear younger even when not transformed. The relation between these events and the Dubious Paper, a research paper about the powers of the Crystal Stars hidden in the minor-league Glitz Pit locker room at the time of Mario's adventure, are not made clear.

To support his poor family, Prince Mush enters the Glitz Pit as a fighter and becomes its first champion. When Mush discovers Grubba's secret, Grubba sucks his power away from him, providing no explanation of Mush's sudden disappearance to the public. Afterward, Grubba hires a manager, Jolene, who secretly takes the job to discover what really happened to Prince Mush, her little brother. On one occasion, Jolene witnesses his transformation into Macho Grubba, where she loses hope to avenge the loss of her brother.

Mario and his partners arrive in Glitzville to meet Grubba after the Magical Map detects Grubba's Crystal Star, which is the third Crystal Star they need. Seeing the supposed Gold Star on the Champ's Belt, Mario meets with Grubba to become a Glitz Pit fighter. Grubba agrees to the proposition and gives him the ring name, "The Great Gonzales." Shortly after Mario advances through the minor leagues, KP Pete walks in on Grubba using his machine and Grubba absorbs his energy, hiding him in the second floor storage room shortly after.

Grubba viewing his secret paper before Jolene and Mario come into his office.

Pleased with Mario's performance, Grubba invites him into his office to give him a thirty coin bonus and welcome him to the major-league. When Jolene, escorting Mario and his party, enters, Grubba is looking at something and quickly hides it in his drawer, berating Jolene for not knocking. Jolene then takes Mario and his party to the major-league locker room, where they meet Rawk Hawk and determine that the star on the Champ's Belt is a fake. Allegedly hearing their discussion, Jolene, under the pseudonym "X," sends Mario an e-mail promising to lead him to the real Crystal Star.

After Mario finds the Dubious Paper in the minor league locker room, Grubba grows suspicious and sends him a threatening, anonymous e-mail. Around this time, Bandy Andy goes into the arena when no one seems to be around and witnesses Grubba's transformation. As with KP Pete, Grubba drains his energy after catching Bandy Andy and hides him along with KP Pete.

Mario and his partners follow Jolene's instructions and witness her and Grubba having a conversation. Jolene reports to Grubba that no one was found in the storage room when the noises were heard, but Grubba remains suspicious. He asks her where she went when she disappeared for long periods of time and whether or not she has ever heard of a Crystal Star, where she responds with satisfactory answers. However, Grubba quickly sends an e-mail to Mario, warning him not to pry into matters concerning the Crystal Star lest he meet the same fate as the other missing fighters. Shortly after, Mario discovers KP Pete and Bandy Andy in the storeroom. 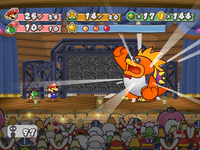 Grubba, in his Macho Grubba form, charges himself up to fight Mario.

After becoming the champion, Mario gains access to the champion's room and uses its location to spy on Grubba, regarding to Jolene's anonymous advice. Grubba is, at that moment, talking to himself regarding his secret machine, the missing fighters, and whether or not he should make Mario "disappear". Hiding the machine's blueprints in his desk, Grubba leaves his office for a minute and returns to find Mario and his partner inspecting the secret blueprints for the machine.

Grubba after being defeated by Mario and co.

Hastily, Grubba flees to his machine in the arena, closely followed by Mario and his party, where he transforms into Macho Grubba. Mario then defeats Macho Grubba, and he transforms back into his normal form, where he compliments Mario on the fight. Jolene rushes to the ring, thanking Mario for his efforts and explaining her actions and motivations to him. Jolene demands that he tell her what happened to Prince Mush, where Grubba confesses.

The Gold Star uses its power to restore Jolene's brother before it is removed from the machine. Grubba's machine deactivates and Jolene gives Mario the Gold Star in order that the events will not be repeated. Jolene takes over Grubba's position as the promoter of the Glitz Pit. Both Bandy Andy and KP Pete recover. Grubba claims that four fighters have disappeared before King K that year alone. However, the total number of fighters drained by Grubba, as well as his whereabouts following his defeat, is unknown.

When he was younger, Grubba claimed to have had many powerful moves, some of which were made illegal after he used them. However, by the time he encounters Mario, Grubba has lost his ability to fight without the aid of his machine. To fight his enemies, Grubba is forced to use the machine to transform into Macho Grubba. In that form, he has many attacks.

Though he is a Spike, Grubba does not have all of the normal physical features of one; rather, he bears a slight resemblance to Tubba Blubba from the original Paper Mario. Unlike most Spikes, whose skin is green, Grubba has a pale blue shade of skin. His shell is orchid in color, with a yellow rim and is hair is a fiery orange color; these features too are unlike Clubbas, which bear whitish-colored hair and different colored shells. Grubba's lips are very large and orange in color. He is also the only Spike ever seen to wear clothes.

Grubba creates a good-natured facade to mask and distract his concealed motivations that benefit himself at the expense of others. While on public and promoting the Glitz Pit, Grubba shows his public image: friendly and passionate about his life's work. Paper Mario: The Thousand-Year Door hints that Grubba's obsession with his image develops as a result of his fame. Originally, he has not cared about glitz and glamor, though later in life, Grubba feels nostalgic about what he once was and wants to relive those days, despite the costs. Despite this emotional transformation, Grubba retains an air of good sportsmanship throughout his life. Grubba encourages his fighters and did not mask his excitement for rising stars such as Mario. Even as he lay defeated, he commends Mario for a good fight. Due to the unethical use of the power-draining machine, this causes Grubba to keep the usage a secret and he uses the machine to his advantage to continue keeping it concealed. As Goombella realizes as soon as she met Grubba, he is a "super-greasy smooth talker" and not necessarily trustworthy, even while he maintains his facade. The text in the dialogue box hints at his possessing a heavy southern accent.

Grubba also has a tendency to gossip or possibly make trash talking comments that he attributes to other fighters even if they never actually said such a thing. However, he has at least some respect for strong fighters, congratulating Mario when he defeats him.

Outside of battle, Goombella can use Tattle on Grubba only when Mario declines to sign the contract to become a Glitz Pit fighter.