“People ask me if I get tired of walking the same route every day... And I say, "No way, Jose!" Because it's a bit different every day, you know? I'm not the same as I was yesterday... Neither are you... Even the town changes... And you'll never see another day just like today, so treat each day like it is: unique!”
—Toadia, Paper Mario: The Thousand-Year Door 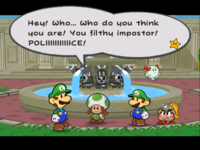 Toadia is a female Toad who lives in Poshley Heights during the events of Paper Mario: The Thousand-Year Door. She is a huge fan of Luigi, so much so that she is the secretary of the Luigi Fan Club.

She has a trouble where she says she wants to meet Luigi. Mario must get the L Emblem, wear it, and go to her to complete the trouble. Towards the end of the trouble, the real Luigi shows up on scene. Toadia, thinking that the real Luigi is an impostor, starts yelling at Luigi. Luigi thinks that it is "all a bad dream". In the end, Toadia rewards Mario by giving him a Choco Cake.

When Bowser and Kammy Koopa visit Poshley Heights during an intermission after Chapter 7, Bowser can optionally talk to Toadia, who will only scream and tremble in fear at the sight of him.