The list of implied events is a list of events and celebrations that have not physically appeared up in any form of media to this point in time. Regardless of their lack of appearance, implied events have been mentioned at least once throughout the Mario franchise.

The Annual Plumbers' Dance is an apparent social gathering consisting of plumbers that was mentioned in The Super Mario Bros. Super Show!.

In The Super Mario Bros. Super Show! live-action segment "Dance", Mario, for Luigi's birthday, buys him a gift certificate for a dance lesson from Shabba-Doo, also buying himself a certificate as well. It was Mario's hope that he and Luigi could learn to dance expertly after gaining some tips from Shabba-Doo and be the best dancers at the Annual Plumbers' Dance.

The Boom-bassa-boom Festival is mentioned by Flavio in the game Paper Mario: The Thousand-Year Door. He mentions it while singing the riddle to open the entrance to the Pirate's Grotto. It seems to involve red and blue mustachioed brothers, and the red one has to be Spin Jumped on the head three times, after which the blue one has to be whacked four times on the stomach.

The Gerbilympics is an event implied in Super Paper Mario.

Mario and Princess Peach can only trigger the game's one reference to the Gerbilympics by unlocking the VIP Generator Room while paying off their damages in Merlee's Mansion. In the VIP Room, Ackpows commonly insult their slaves by calling them gerbils, as work in the VIP Room involves running on wheels; this is compared to the normal, jump-oriented room where workers are called fleas. If the player manages to generate enough electricity to earn five thousand or more Rubees in one work session in the room, the impressed Ackpow will pay them off and suggest that they, due to their incredible running skills, join the Gerbilympics.

The Jazzafrazz Town Drama Slam is an annual event mentioned in Paper Mario: The Thousand-Year Door that is held in the Dayzee town of Jazzafrazz. In the Drama Slam the person who writes the best musical wins the Dramalama Plaque. Luigi had to win the Drama Slam in order to get a piece of the Marvelous Compass which is embedded in the plaque. 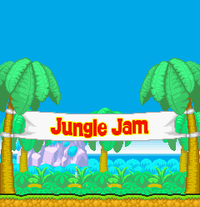 The Jungle Jam is an athletic competition participated in by the Kongs in DK: King of Swing. 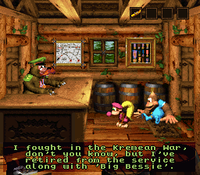 Bazooka talking about the Kremean War

The Kremean War is a war that happened on an unspecified date; it is briefly mentioned by Bazooka, who is a veteran of the conflict, in Donkey Kong Country 3: Dixie Kong's Double Trouble!

On the letters page of their site, Rareware gave a very sarcastic answer on the circumstances of the Kremean war.[2]

The Kremean War's name is a pun on the real-life Crimean War, which was a conflict between several European nations in the mid-nineteenth century.

The Mushroom Ball is a formal dance referred to by Princess Peach in Paper Mario: The Thousand-Year Door.

After Mario defeated Lord Crump inside Magnus von Grapple and received the Emerald Star (Chapter 2), Peach worries that she'll never be able to dance in the Mushroom Ball ever again. TEC, assigned to watch Peach by Sir Grodus to avoid her escaping, hears her and calls her into his room. He then dances with her by projecting an image of Peach herself to dance with. After this, TEC says that he had "fun" dancing with Peach, and lets her use the communicator to send a second email to Mario.

Princess Peach's Cooking Contest is a cooking contest hosted by Princess Peach. In Paper Mario, Toad Town News posts a piece of news commenting on the postpone of the contest as a result of Peach's Castle being lifted into the sky by Bowser. According to their news, the contest is hosted once a year.

The Sammer Awards are award elections held each year in Sammer's Kingdom in Super Paper Mario. It is mentioned when the player finishes the game, goes back to Sammer's Kingdom and finishes the Duel of 100. When using Tattle on End Boss, the final Sammer Guy, Tiptron will say that he won a Sammy at last year's Sammer Awards for Best Final Boss Performance. This appears to reference the Grammy Awards.

The Secret Sale is a sale that offers "beautiful photos of Princess Peach." Its advertisement is posted on the Toad Town Notice Board in Paper Mario. To inquire about this offer, one should send a letter to "Toad Town Post Office, P. O. Box 7144, Secret Toad." The seller claims to accept no complaints or returned goods. Later in the game, a fan of Princess Peach posts complaints about it. It says that they paid 100 coins but got three unbeautiful, out-of-focus photos.

The Strongest Pianta Tournament is mentioned by a purple Pianta in Super Mario Galaxy 2 in Starshine Beach Galaxy in the mission "Climbing the Cloudy Tower."

The Darkening was a time period of the Flora Calendar, invented by the Floro Sapiens, mentioned in Super Paper Mario, happening in Flora years 444 to 496. It was caused by King Croacus I, a once-great ruler, but due to the wilting of his son, he became corrupted, starting the Darkening. The Darkening is never explicitly described, but it can be assumed that it was a period of civil war. The Darkening was stopped by Queen Croacus II by overtaking the previous king.