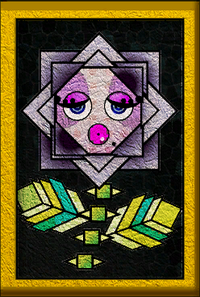 A portrait of King Croacus I

King Croacus I, also known as the Iron Rose, was the first king of the Floro Sapiens from Super Paper Mario. His existence and history is told by his painting. The Floro Sapiens regard him as their greatest king, since he united them all into the Flora Kingdom. He created the Flora Calendar and set the capital at the Floro Caverns. His nickname, the Iron Rose, comes from his heavy armor and deadly thorns. However, the wilting of his son in the Flora year 444 changed his mentality. He became corrupt, a period referred to as "The Darkening", at which point, his daughter staged a coup d'état and took over the Floro Sapiens. His dying words were stated to be "The Iron Rose shan't wither!" Apart from his painting, he appears depicted in a mural in the Flopside Pit of 100 Trials, in rooms 26-50.

Croacus I ruled from the Flora Calendar's year 1 to year 496; this alongside his depiction in the Flopside Pit of 100 Trials and the timeframe of King Croacus IV's recent actions in Flora years 1625-1626 imply he was the Floro Sapien king entrusted with the indigo Pure Heart by the Tribe of Ancients, 1,500 years prior to the events of Super Paper Mario. The Pure Heart would be guarded by the royal lineage even after his fall, eventually making it to Croacus IV and being passed to the hands of Mario and co..

King Croacus the First (Reign: 1-496). The first king of the Flora Kingdom. Croacus I is known as the greatest of kings. He united the Floro Sapien under a single cause, creating the Flora Kingdom. He made a capital here and established a calendar, begun at the kingdom's birth. Heavily armored, he bore deadly thorns and came to be called the "Iron Rose". The kingdom's infrastructure and early roads were built by Croacus I's design. But when his successor, the prince, wilted unexpectedly, so did Croacus I's spirit. The Flora year 444 marked the start of his reign of fear, "The Darkening." Eventually Croacus I and his foul regime were overthrown in a sappy coup d'etat. The king was struck down, marking the official end of The Darkening. His wiltering words were said to be "The Iron Rose shan't wither!" But wither he did.