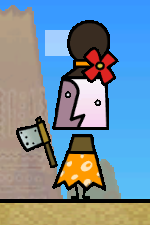 Norite is a Cragnon who makes a brief appearance in Super Paper Mario in a hidden part of Chapter 5-1. She is seen after the heroes hit the Whacka a certain amount of times and causes it to flee. If Mario and co. do this, she will become very depressed. She is named after a type of igneous rock, norite. Ironically, although she is depressed when Whacka leaves, her favorite snack are Whacka Bumps, according to her tattle.

That's Norite... This girl came out of nowhere in search for Whacka... Whacka always touched her delicate heart with his constant smile. But they were suddenly separated... and now Norite's heart is about to burst. In her sadness, she cannot even eat her favorite snack, Whacka Bumps...