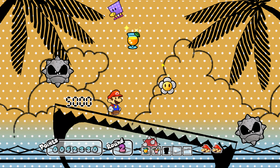 Tilt Island is a minigame found in Super Paper Mario. According to The InterNed, the music that plays during the minigame also goes by the name "Tilt Island". To play, the player must hold the Wii Remote sideways (the way one would normally hold it in the game) and tilt it to move Mario, Peach, Bowser, or Luigi, depending on which character enters the minigame) left or right. The player catches falling desserts for points while collecting enough desserts to advance to the next round. If the character gets hit by a falling monster or gets tilted off the island, they lose a life. If they lose all three lives, the game's over. The game has a total of twenty levels, and clearing all of them wins the game.

Unlike the other minigames in the arcade, the player's performance in Tilt Island can be influenced by the character they choose to participate as - Peach and Bowser tend to be larger targets and move at a slower pace, making them much more prone to being damaged by falling enemies. Contrariwise, Mario and Luigi are smaller and faster.

The points are earned when a particular enemy is defeated.

Collecting only one type of dessert in a stage earns the player a bonus for that stage equal to the amount of points received from the desserts.

Items that can be collected randomly fall out of the sky. Each item is worth 3000 points.