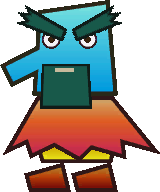 Heronicus is a character in Super Paper Mario who lives in Flipside in the houses behind Saffron's restaurant. He is a retired explorer who "knows much about other lands", with certain smells bringing back memories. After each chapter a different smell brings back a memory of the world most recently visited by the heroes.

On a shelf in Heronicus' home, there is the vase from Chapter 2-3, a Meowmaid-like relic, and a model of the two stone heads found in Chapter 4-2; atop his bookshelf, a dark rock from Outer Space, a totem pole from Downtown of Crag and a torch holder from The Underwhere can also be found. Heronicus additionally has a picture that may possibly depict a blue Squarp hole, and Flipping in his home reveals a picture of a sandy, dune-filled expanse resembling Yold Desert (Curiously, this picture actually shows the background Yold Desert possessed in the pre-release version of Super Paper Mario).

Heronicus also appears briefly at the beginning of Chapter 6-1. After entering the room with Jade Blooper, the first Sammer Guy, Heronicus runs away and exits, apparently having lost to him. His name is also seen in the Flipside Arcade, where he holds the high scores of 550000 and 80000 in Mansion Patrol, and 1000000 in Hammer Whacker.

After the game is beaten, Heronicus tells the player that he spent a part of his life exploring to find a "legendary Pixl", with a partner. When they found this Pixl, there was a rock slide; Heronicus leaped into action and saved his partner, but the legendary Pixl perished during the incident. This is the reason Heronicus stopped exploring. It is mentioned in Flopside by Hatch outside of the Flopside version of Heronicus's house that the person who lived there (presumably Heronicus's Flopped version) also went exploring for a legendary Pixl. Again, there was also a rock slide, but instead of saving his partner, he saved the Pixl instead. It is unknown where the Flopped Heronicus went, but the Pixl he saved was Piccolo, who is then found inside the house.