Merlee's Basement is the setting of Chapter 2-4 in Super Paper Mario. Serving as the setting for the final level in this chapter, it is found within Merlee's Mansion, where Merlee herself is found along with a Pure Heart. A majority of this level takes place in a labyrinth-style structure. Mimi chases the player for a chunk of the level and is fought at the end. 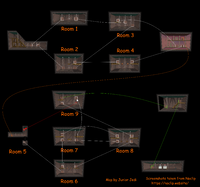 A map of the area

The mysterious handmaid Mimi disappeared in a bizarre explosion...

What exactly was her plan, and why did she try to enslave Mario and friends?

After the incident, Princess Peach notice stairs going down. "Here we go!" she said.

"I wonder if Merlee is down here?" thought our heroes as they traded worried glances...

The two solemnly made their way down, knowing there was no other path to follow.

As Mario, Peach and Tippi start off in the basement of Merlee's Mansion following the events of the previous level, Tippi informs Mario of the Pure Heart being nearby. Abruptly, Merlee appears via a magical projection to contact them. She informs them of her being somewhere in the basement, in addition to someone being after her, referring to Mimi. Just before her feed cuts out and turns to static, she warns them to exert caution when they do find her, foreshadowing what will happen then.

Mario and the others must proceed through the first rooms in this level's maze-like structure. Several of the rooms are similar in design, excluding different enemies and signs to distinguish them. Soon, Mario and the others encounter what appears to be Merlee, who formally introduces herself and offers the Pure Heart in exchange for 10 million Rubees. When she asks them to sign a contract, another Merlee appears as an apparition, warning them not to sign said contract. As Mario and Peach decline to sign the contract, the other Merlee offers more conditions before giving up and revealing herself as Mimi.

Mimi then turns into her true form and proceeds to chase Mario and the others throughout the remainder of the mansion. As Tippi warns, the heroes may not dawdle in a room, as after a certain amount of time, Mimi will find them. Additionally, she is invulnerable and can be neither damaged nor defeated. Eventually, the heroes become locked in a restroom and finds the true Merlee in one of the stalls. Unfortunately, at this moment, Mimi enters and turns into Merlee once more. As the heroes are not able to distinguish them, they must play through the "That's My Merlee!" show to determine which one is real and fake. Regardless of whether they are correct or not, Mimi becomes furious and attacks, ensuing a battle. Merlee assists Mario and Peach in defeating Mimi, prior to giving her story along with the Pure Heart.

Count Bleck's servant Mimi had laid a nasty trap for Mario and friends...

But with the help of Merlee, faithful defender of the Pure Heart, the day was won.

But who were the other two heroes mentioned by Merlee?

With five Pure Hearts yet to be found, Mario knew this adventure had only begun...