“Meeeeork! Meork! Come and get it if you can! Nyeah, nyeah!”
—Fuzzy, Paper Mario

Fuzzies, also called Fuzzles,[1] are small, black-furred creatures with unusual, spiky bodies. They possess two strabismus eyes and large teeth. Despite displaying some level of intelligence and the ability to speak, Fuzzies are, for the most part, erratic creatures. Fuzzies made their debut in Super Mario World.

Fuzzies first appear in Super Mario World as particularly rare enemies that cannot be defeated, found circling blocks or the wire-like constructs floating in mid-air. They first appear in the same level where ON/OFF Switches first appear, Donut Plains 3. Fuzzies do not directly attack Mario or Luigi and only do damage if their paths happen to intersect. The ones circling around blocks can be defeated, either by Yoshi or by tossing (or kicking) a Koopa Shell at them. Fuzzies are among the few enemies not shown during the game's end credits.

A Fuzzy and a Big Fuzzy from New Super Mario Bros. Wii.

Although absent from the first New Super Mario Bros., Fuzzies, along with bigger versions called Big Fuzzies, neither of which were named in the Prima Games guidebook, reappear in the game New Super Mario Bros. Wii where they are found in Worlds 7 and 9. They act the same way as they did in Super Mario World. Unlike in Super Mario World though, they can be defeated by being frozen and shattering the block of ice they are trapped in or blasting them with fireballs as Fire Mario. Fuzzies can also be found on wires and are mostly in sky levels. They appear in World 7-3, World 9-5, and World 9-8. They are usually found in big groups, and they also do flips when they jump from one wire onto another.

A Fuzzy moving on a pole.

Fuzzies appear in Super Mario Galaxy 2, marking their first appearance in a 3D Super Mario title. They first appear in the Honeybloom Galaxy, moving up and down the orange poles that Mario or Luigi can climb. Fuzzies are also found in the Flipsville Galaxy, where they can be defeated with a Spin Drill. They look very similar to how they did in New Super Mario Bros. Wii, though they leave behind black smoke clouds as they move.

Fuzzies later appear in Super Mario 3D Land. Mario must avoid them on tightropes in this game. They are invincible unless Mario (or Luigi) touches them while invincible.

Fuzzies, along with their larger cousins, return in New Super Mario Bros. U, acting the same as they did previously. They first appear in Fuzzy Clifftop of Rock-Candy Mines.

Fuzzies reappear in Super Mario 3D World and Super Mario 3D World + Bowser's Fury. In this game, they have the ability to move without the aid of a line. They are generally found in Shadow-Play Alley and moving through and around Clear Pipes. Like in previous games, they are almost invincible, as they can only be defeated by a Super Star, Lucky Cat Mario, or a Potted Piranha Plant. Fuzzy Hordes also make an appearance in Fuzzy Time Mine. They have a regional variant that features cat ears and a tail found in Super Mario 3D World + Bowser's Fury, specifically in Risky Whisker Island. Here, a potted Cat Piranha Plant must be taken around the lighthouse to eat the Cat Fuzzies and award Mario with a Cat Shine.

In Super Mario Adventures, a Fuzzy makes a small appearance, being among the monsters sent by Bowser to attack Princess Toadstool's Castle.

A Fuzzy from Paper Mario.

Fuzzies make a return appearance in Paper Mario, which reveals a large group of them inhabiting the woods behind Koopa Village. Fuzzies attack by draining HP from Mario. Outside of battle, they move about by hopping, and can secrete webs from their bodies to hang from in a similar manner to silkworms or spiders. When Mario first reaches Koopa Village, he finds it under attack by a horde of Fuzzies who are harassing the Koopa Troopa inhabitants of the village. After Mario defeats the apparent leader of the Fuzzies, who stole the Blue Shell of Kooper, the Fuzzies "promise" to behave and stop attacking the village, at least for a while. A Fuzzy can also be fought in Shy Guy's Toy Box if Princess Peach tells Bowser that a Fuzzy is one of Mario's worst fears, Kammy Koopa then warps one into the Toy Box to guard a treasure chest and defeat Mario.

Two variants also appear: the Green Fuzzies of Forever Forest, also known as Forest Fuzzies, and the Jungle Fuzzies of Lavalava Island. A similar enemy known as the Swoopula also acts and attacks like a Fuzzy.

There is a piece of Toad Town News that warns their invasion in Koopa Village.

Also, an aqua colored Fuzzy was intended to appear, but it never made it into the final version.

In Paper Mario: The Thousand-Year Door, Fuzzies appear as semi-common enemies, first appearing in Shhwonk Fortress and later, one appears as a member of the Fuzz fighting team in the Glitz Pit. They also appear in the first floors of the Pit of 100 Trials. They have the same parasitic method of attack as in the previous game. Green Fuzzies also reappear, and the Jungle Fuzzies from the previous game are replaced by the similar Flower Fuzzies. A new type of Fuzzy is introduced as a mini-boss, called the Gold Fuzzy, and the Fuzzy Hordes, a large group of Fuzzies, are also introduced in this game.

In Super Paper Mario, Fuzzies appear as enemies on the Planet Blobule, where unlike their previous appearances, instead of draining HP, they attack other creatures by bouncing into them. The most dangerous type of Fuzzy (called a Dark Fuzzy) is introduced in this game. Flower Fuzzies, repurposed as Pink Fuzzies, also return from the previous game.

Fuzzies make another appearance in the Nintendo 3DS game Paper Mario: Sticker Star. They are one of the few enemies in the game to retain their appearance from the first three Paper Mario games. They only appear in level 4-5, Whiteout Valley, where they ride the ski lift bar, coming from the front and back. Once a Fuzzy reaches Mario, it jumps up and falls onto Mario unless he either swings his chair out of the way or jumps to knock the Fuzzy away while it sits directly above Mario's head. Fuzzies often appear in groups of 2-4. In battle, all a Fuzzy can do is simply bounce and slam into Mario. However, if a Fuzzy is hit and not defeated, it multiplies into two Fuzzies, similar to their multiplication powers in previous Paper Mario titles.

Fuzzies return in Paper Mario: Color Splash, keeping their appearance and attack from the previous game. They can be found in The Golden Coliseum, Redpepper Volcano, Toad Trainworks, and Sunset Express. If jumped on or hit by Mario's hammer outside battle as a First Strike attack, they are defeated without having to start a battle. A Fuzzy is the first-round opponent in Roshambo Temple #5. Fuzzy Stacks can be encountered in Redpepper Volcano and Toad Trainworks.

Origami Fuzzies appear as enemies in Paper Mario: The Origami King. However, Mario cannot enter battle with them, and they instead only act as obstacles in the overworld. Mario will lose HP if he collides with them, but can defeat them by hitting them with the Hammer. 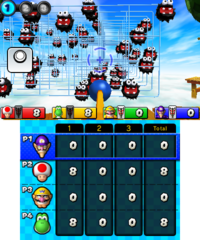 Fuzzies once again make an appearance in Mario Party: Island Tour, in the minigame Buzz a Fuzzy. The player has to use the suctions to capture as many Fuzzies as they can. A Fuzzy also appears as one of the tiles in the minigames Match Faker and Tap Dash.

Artwork of Fuzzy in Mario Party 10

In Mario Party 10, Fuzzies appear in multiple minigames, some appear in Airship Central to take away Mini Stars; they also appear as obstacles in Fuzzy Fliers, and as a selectable enemy in Meanie Match.

Fuzzies appear in the minigame, Dodge Fuzzy, Get Dizzy in Mario Party: Star Rush as the primary obstacles. They move in a rail, where players need to spin past them to progress. If players get hit by them, they get stunned momentarily.

Fuzzies appear in Super Mario Party as non-playable characters. They are featured in the Fuzzy Flight School minigame, where the players must dodge them in their planes. A Fuzzy can also appear in Absent Minded as one of the characters that can be selected.

Fuzzies and a Fuzzbush in Mario & Luigi: Superstar Saga.

Fuzzies once again appear as cameos in Mario Kart Tour on Fuzzy Battery signs, which can be seen in Waluigi Pinball and the new New York Minute courses.

Fuzzies appear in Captain Toad: Treasure Tracker and its Nintendo Switch and Nintendo 3DS ports in Clear Pipe Puzzleplex, Biddybud Snow Stroll, Poison Canal Cannon Run, Shadow-Play Alley and Clear Pipe Cruise. They can only be defeated using a Super Pickax or an Invincibility Mushroom, and unlike most enemies in that game, do not react in any way to the touch screen / pointer interaction.

Fuzzies appear in Dr. Mario World as assistants. Their stage mode effect is to grant a chance that the first three capsules will be of matching color, where both halves will be changed to the same color based on the left half's color. The effect has a 40% chance to activate on the first level and an 80% chance to activate at the maximum level. Their versus mode is to instead clear a column on the user's side of the stage if the opponent uses a skill. Two of them are rewarded as assistants, where each are obtained by clearing the first areas of World 22 and World 29.

Fuzzies appear in WarioWare: Get It Together! in the New Super Mario Bros. U microgame where players must avoid them to collect coins. If they have attacks, they can be defeated. They are also present in level 2 of the Super Mario World microgame.

Fuzzy
Tribe: Creep clan
Disposition: Keeping one's cool
Game appearances: World
He's a big pain in the butt
The meddler is circling on the rails. You have to time your attacks to avoid them. Let's move on as if it were an obstacle.