This article is about the land of Subcon. For its fairy-like inhabitants named Subcon, see Subcon (species). For the stage that takes place in Subcon from Super Smash Bros. Melee and Ultimate, see Mushroom Kingdom II.

Subcon[1] (alternatively formatted as Sub-con[2] or Sub-Con;[3][4] also known as the World of Dreams[2][5] or Land Of Dreams;[6] formerly called Muu) is a peaceful dream world of the Subcons. Believed to be Mario's dream, it is said to be a vast dream world that is part of a larger subconsciousness of the Mushroom Kingdom's inhabitants. The name "Subcon" itself is short for "subconscious".

In Yume Kōjō: Doki Doki Panic, the dream world is in a storybook that the twin children Poki & Piki got pulled in by Wart. In fact, the reason Chapter 7 has only two pages is due to the fact that the original ending was accidentally destroyed by the twins. This detail is lost in the Mario version of the game's events. 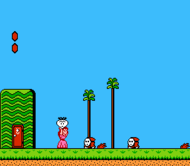 Subcon is the main setting of Super Mario Bros. 2, the world's first appearance in the Mario franchise. Subcon was once a peaceful place until it was taken over by the tyrannical Wart. He created monsters with the Dream Machine, and sent his army from the dream factory all around Subcon. The original inhabitants of Subcon were captured and imprisoned in a jar by Wart's minions so that they would not interfere with his mischief.

From their confinement, the Subcons sent a message to the hero of the nearby Mushroom Kingdom, Mario, to come and free them. At first Mario thought the message was just a dream, but the next day, while on a picnic with Luigi, Toad, and Princess Toadstool, he discovered a cave that led him to the world he saw in his dream.

Mario and his friends instantly set out to free them and defeat Wart to free Subcon from his reign. They battled Wart's army, the 8 bits. In the end, they faced Wart himself, and were eventually able to defeat him and free the captive Subcons. Mario then briefly awakened in his bed, and soon went back to sleep. 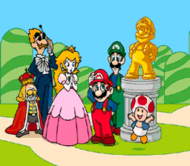 Subcon is again the main setting of the pseudo-sequel of Super Mario Bros. 2 for the Satellaview, BS Super Mario USA. This game appears to depict Subcon as a realm of dreams, rather than an actual dream like the ending of Super Mario Bros. 2 implies, and explains that after his defeat, Wart and the 8 bits went into hiding in another dream for a short while. However, they soon return, and the king of Subcon is forced to use Star power to call Mario and the others back to Subcon to stop Wart once again. Mario, Luigi, Toad and Princess Toadstool were able to defeat Wart and his army once more, thus returning peace to Subcon and its inhabitants.

In Super Mario Advance, there were now Yoshi Eggs scattered all around Subcon, which Mario and friends has to recuperate. Besides that, the game's depiction of Subcon is the same as in the original. 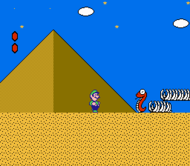 Luigi in the deserts of Subcon

Plants stick out throughout Subcon, which, when pulled, will give the character a vegetable, 1-Up Mushroom, POW Block, or, occasionally, a Bomb. A lot of the region of Subcon is high in the sky, as clouds would be considered "land". The dream world has many moons at night as first seen in Super Mario All-Stars. Subcon also has many recurring landscapes, such as grasslands, deserts with pyramids, snowy islands, and others. The only castle structure is Wart's factory, and no towns or cities are seen throughout the game. Super Mario All-Stars added jungle trees (Worlds 1, 3 & 5), mountains and Egyptian palaces in the desert distance (Worlds 2 & 6) and floating Greek-style temples (World 7) as background objects. According to BS Super Mario USA, Subcon has a kingdom and a king. It is not known how much of Subcon is considered a true kingdom; if not the entirety of the dream world, seventh world in the clouds of Subcon above the grass or the desert region is probably the whole region of the kingdom itself. The factory from World 7-2 is actually the king's castle.

Artwork of a coin from Super Mario Advance

Subcon also uses coins, though their design is different, with an "I" in place of the "1" on the Mushroom Kingdom's coins. While relatively plentiful in most other Mario platformers, coins in this world are instead rather rare. Instead of being found floating in the air or in blocks like in the Mushroom Kingdom, Coins could only be retrieved by using a Magical Potion to go to Subspace, where unpicked grass gives coins in place of items (said grass still remains after leaving Subspace). Coins are used to earn extra lives in a minigame after finishing a level.

Subcon's natural population consists of mostly Subcons, although the seldom-seen king and his aide appear to be human. During Wart's takeover, several monsters were artificially created, although some existing creatures like Albatoss and Tryclyde were merely enlisted to his forces. Other creatures resembling those from the real world are also known to exist, such as whales residing in icy territory.