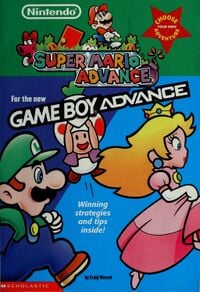 Super Mario Advance is a gamebook by Craig Wessel, based on Super Mario Advance. As such, it stars Luigi, Mario, Princess Peach, and Toad and details their adventures through the land of Subcon as they attempt to go and defeat Wart. It is the first of four Game Boy Advance books and was published in September, 2001. It is an interactive gamebook which allows the reader to make choices that affect the outcome of the story as Mario and his friends battle Wart and his minions to rescue the people of Subcon.

The book begins with Mario having a dream about climbing a staircase, until he reaches the top, which has a closed door. Mario opens the door, and he sees the land of Subcon before him. The next day, he goes on a picnic with Toad, Luigi, and Peach, and they all find a door which leads them to the world of Subcon once again. However, their A Traveler’s Guide to Subcon book, which they randomly find, gets blown away. The heroes, minus Peach, debate over who should retrieve the guide book. The reader then selects a character to do so, starting the adventure.

As with Chooseco's Choose Your Own Adventure gamebooks, after selecting a character, the reader must flip to different pages throughout the book to correspond with the choice they pick at the bottom of each page, until they reach one of the endings.

If the reader gets a bad ending, the book tells the reader to flip to another page, where the actual ending is described: Mario, Peach, Toad, or Luigi wake up and wonder what happened. However, something then happens that causes them to get out of bed and start their day, forgetting about their dream as the people of Subcon lose hope and are doomed to be under Wart's control.

The book's good ending involves reaching Wart for the final battle. However, Mario, Toad, and Luigi are easily trapped by Wart's bubbles. While this occurs, Peach manages to retrieve a vegetable from the Dream Machine (simply called a vegetable machine), and throws it into Wart's mouth, to which he reacts negatively. She repeats this several more times, dodging Wart's bubbles all the while, and he eventually disappears. A voice representing the people of Subcon tells them that it is within their power to grant them all a wish, but the group of four simply smile and Mario tells them that they do not need a wish as they have each other, to which the voice responds that their names will be forever remembered in Subcon and they await to meet them in their dreams again. After they awaken, the group meet at Mario's house and talk about their adventure, but Mario receives a letter from a messenger stating "It’s not over yet — I’ll be back! Signed, Wart". Mario proclaims that Wart does not stand a chance as long as they are together, and they toss the letter in the trash to celebrate their victory.