Not to be confused with Mega Monty Mole.

“いいなあ…あっしと同じ 種族なのに でっかくて 迫力あって… (How lucky... It's the same species as me, but it's bigger and more powerful...)”
—Monty Mole, Super Mario 4koma Manga Theater

Mega Moles are overgrown Monty Moles[1] that are impervious to many attacks. They act in charge of the other Monty Moles,[2][3][4] and are depicted to have poor eyesight.

In Super Mario World and its remake, Mega Moles are exclusively found underground, appearing in Chocolate Island 4, Valley of Bowser 1 and Valley of Bowser 2. They are invulnerable to Mario and Luigi's jump or Spin Jump moves as well as Fire Mario or Luigi's fireballs, but can be defeated by using Caped Mario or Luigi's spinning attack, a Super Star, a Grab Block, or a Shell. Like other enemies, they are also immune to hazards such as Munchers and spikes. Standing on a Mega Mole's head is not a danger by itself, and will allow Mario or Luigi to ride it. Unlike regular Monty Moles, they do not pop out of holes in the ground. Despite their size, they can be eaten and swallowed by Yoshi. While most enemies merely result in the loss of Yoshi when getting hit by them, a few others, including Mega Moles, both hurt Mario and force Yoshi to run away. In the remake, if Yoshi eats a Mega Mole and spits it out while Luigi is riding him, a unique sprite of it facing the screen (thus resembling Monty Mole's jumping sprite) can be seen as it rolls along the ground.

Mega Moles first appear in the third Super Mario World volume, where Mario, Luigi, and Yoshi encounter and defeat a group of them while traveling through Valley of Bowser 1. 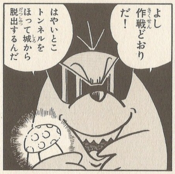 In the fourth Super Mario World volume, Larry Koopa commands two Mega Moles to attack Mario and his friends. However, Luigi quickly digs a hole that the Mega Moles fall into due to their poor eyesight.

In the sixth Super Mario World volume, a Mega Mole appears as the main antagonist of the first chapter, stealing a Golden Mushroom to fund their mining tunnel. The Mega Mole uses a Bowser-shaped chariot and a Wiggler-shaped cargo vehicle to attack everyone, but are defeated by Mario and Yoshi. 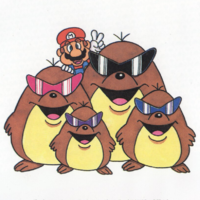 Artwork of a Mega Mole family in the second 4koma volume

In the third Super Mario Kart volume, the inner temple that is located in the Pū Tairiku is shaped like a Mega Mole.

A Mega Mole family appear in the second 4koma volume, having different sizes and different color shades. The family also appears throughout a few of the pages. In the "Videos Now on Sale" (ビデオ発売中) strip, Mario can be seen holding a small Mega Mole with him saying,「モグラはダメ?」("Moles aren't good?"). In the "Lala~lalalalala~la~" (ララ~ラララララ~ラ~) strip, Mario wins several small Mega Moles from a crane game. In the "Let's Give Flowers ♡" (花をめしませ♡) strip, a Mega Mole receives a large bouquet from Mario. In the "Mole" (もぐら) strip, Mario is seen riding a Mega Mole.

The "Big Heads Have Little Wit" strip, in the second volume

Mega Moles make their first physical appearance in volume 2, in the "Big Heads Have Little Wit" (大男総身に知恵が回りかね) strip, where a Mega Mole is talking to a Monty Mole who is waiting for Mario in order to ambush him. As the Mega Mole leaves, the Monty Mole comments on how the Mega Mole is a bigger and more powerful species, who fails to notice Mario riding the Mega Mole. 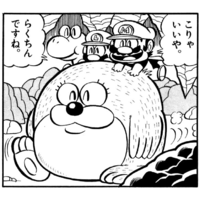 The friendly Mega Mole in volume 1 of Super Mario-kun

In a Mario Paint-themed chapter from volume 5, Lemmy Koopa is able to make a crudely drawn version of Mega Mole as well as other Mario enemies using the SNES Mouse before they are quickly defeated by Mario and Yoshi. 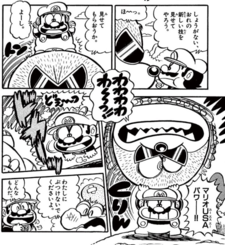 A Mega Mole being thrown by Mario in volume 7

A Mega Mole driving a kart working for Bowser has a major role in a later chapter in volume 6. When Mario and his friends go through an ice area, they come across The Mega Mole accidentally breaking the ice underneath them before Lakitu picks up the Mega Mole out of the ice before driving towards Mario. After a brief scuffle with Mario, Luigi, and Yoshi, the Mega Mole is buried in a snow sculpture of itself by the trio.

A Mega Mole appears in volume 7, in which it blocks Mario and Yoshi's path telling them to give up their oseibo (a year-end gift). Mario then picks up the Mega Mole (referencing Super Mario Bros. 2) and throws it at Yoshi.

Although normal Mega Moles do not appear in volume 9, a Venus Fire Trap-Mega Mole fusion known as Pakkun Mogura is seen as the main antagonist of the second chapter.

In the Nintendo Adventure Book Dinosaur Dilemma, if Mario offers a basket of apples to Yoshi and some dinosaurs he finds near Lake Trilobite, a Mega Mole will burst out of the dinosaur costume seizing Mario's sleeve. The other dinosaurs (including Yoshi) will turn out to be Mega Moles in disguise, and will surround Mario after removing their costumes, they proceed to eat Mario offscreen which leads to a Game Over. Some more Mega Moles can be encountered the basement of a decrepit mansion, where two furry objects can be seen in the distance blocking the exit sign. If Mario goes deeper in the cellar, he meets three more Mega Moles that sniff him before biting him and chasing Mario, attempting to eat him. If Mario chose the right path, he remembers that Mega Moles have poor eyesight and steps out the way making the Mega Moles go by as he escapes. Choosing the wrong path will lead to a Game Over, when Mario blindly falls into a watery pit inhabited by a Blargg.

Some Mega Moles appear among the crowds at the International Dino-Flying Derby in Flown the Koopa, and eye Mario and his friends hungrily when the show ends. Later in the swamp, if Mario and Luigi don some Mega Mole costumes (which are covered with matted gray fur), six real ones will approach the two with gifts. After "befriending" the Mega Moles by singing old plumbing songs and exchanging cookie recipes, Mario and Luigi have a plan to go in their cave and load up on supplies, before bursting through the castle with the help of the Mega Moles. Once they arrive at the Mega Moles' cave lair, the Mega Moles continue stuffing the plumbers with food, before weighing them down with "gifts". Mario then looks at the books before grabbing a book called Mega Moles In The Mist by Diane Flossy. As the Mario Bros. realize that the Mega Moles brought other people to their lair, trapping them, Mario realizes his fate before finishing the book, leading to a Game Over. Finally, another group of Mega Moles will attack Mario and Luigi, causing a Game Over, if they decide to explore a dark portion of Magikoopa's Fortress with a flashlight, which quickly dies on them since the Mega Moles can see very well in the dark.

In Unjust Desserts, some Mega Moles are shrunk by Magikoopa, and sent into Yoshi's body after Mario, though the hero never encounters any inside the dinosaur, just in the palace garden when he and all the creatures Yoshi and Luigi had eaten are spat up by them.

A Mega Mole appears in Mario Family, as one of the sewing designs.

In Mario Strikers Charged, the sprites for Mega Moles seen in Super Mario World can be seen on the pillars in The Sand Tomb.

Mega Moles appeared in a Mario-themed Kirin Lemon commercial, being much smaller then they are normally. When Yoshi eats one of the Mega Moles, he spits fire, which does not happen in Super Mario World.[6]

Mega Mole
Tribe: Beast clan
Disposition: Hasty
Game appearances: World
Let me give you a ride.
The master of the moles that appears on the cave courses. It has a large body, but it can be eaten by Yoshi. It is very convenient to use it as a bridge platform because you can ride on top of it.

Bio: 大きな体で前進してくるモグラ。頭に乗ることができ、移動手段に使える。[11]
A large-bodied mole that moves forward. It can be ridden on its head and used as a means of transportation.