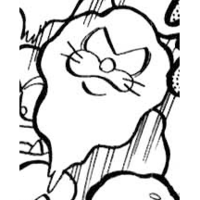 A Choropū Men'iwa when its rock body is broken, revealing its true form