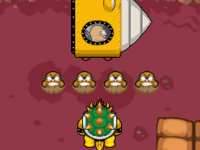 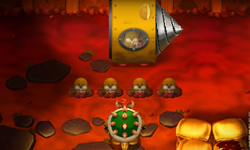 “And you handed it off to us, the Monty Bros., because we rule dirt!”
—Monty Bros., Mario & Luigi: Bowser's Inside Story

The Monty Bros. (generically referred to as Montys in the Prima Guide) are a group of five Monty Moles seen in Mario & Luigi: Bowser's Inside Story and its Nintendo 3DS remake, Mario & Luigi: Bowser's Inside Story + Bowser Jr.'s Journey. They are minions of Bowser, first encountered in the Tunnel beneath Cavi Cape. Here, they are seen using a large drilling machine to drill a tunnel through to reach Toad Town, claiming to be making an escape tunnel for Bowser to use after he has kidnapped Princess Peach, straight back to Bowser's Castle. They had already drilled from Bowser's Castle to Cavi Cape, almost reaching Toad Town. Bowser, who had just spotted them, said that he did not remember giving that order, but helped them nonetheless. Mario and Luigi, inside Bowser's body, would then go to the Leg Outpost and stimulate his leg muscles to push the giant drill before its battery ran out (or in this case, ninety seconds of minigame time).

Later, they are seen in the treasure vault of Bowser's Castle, seeing Bowser again, but they had built railway tracks around their tunnel. After seeing Bowser's shocked face at the tracks, the Monty Bros. reveal that they had switched sides, over to Fawful and joined the Fawful Foundation as well as outsourced the actual hole drilling to someone else in the process. They then jump into the Fawful Express, the reason they had built the tracks. The huge cargo train then proceeds to push Bowser all along the train track, slamming him into a colossal boulder. Bowser then is re-awakened by Mario and Luigi, turning him giant. A battle with the Fawful Express and the Monty Bros. then starts. For most of the fight, they drive the train or make repairs in the Fawful Mountain. Near the end of the battle, they wear yellow masks and have jetpacks to attempt to throw bombs at Bowser. Bowser can counterattack them by punching one of the Monty Bros. to make them drop bombs on the Fawful Express instead, dealing more damage. After Bowser destroys the train, the flying bits of debris from it fall onto the Monty Bros., crushing them. It is unknown if they survived, as they are not seen for the rest of the game. In the remake, however, it appears they survived since they are seen escaping the train before it is destroyed and are not hit by debris. When Bowser picks up the Fawful Express, one of the Monty Bros. land on his nose before escaping.