Sneeds are tiny enemies from Mario & Luigi: Bowser's Inside Story. Their name is derived from the words "Snifit" and "seed". They appear in Bumpsy Plains. 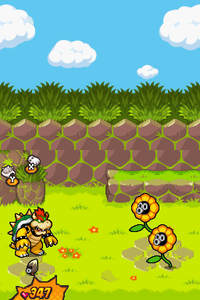 A Sneed running away

Flifits spit out Sneeds as their attack, and if it hits, the Sneed will remain in battle unless there is no space for the Sneed to remain. They can be destroyed in one blow by Bowser to get coins, although Mario and Luigi have to fight them. If they are left alone for a while, they will become Flifits. They attack by shooting seeds at Mario and Luigi. It first shoots one seed at a far distance, then comes closer and shoots another one, and then it tries to ram Mario or Luigi which can be countered. The attacks are dodged by jumping. If any of the seeds hit Mario or Luigi, the Sneed stops its attack.

In Mario & Luigi: Bowser's Inside Story + Bowser Jr.'s Journey, they can also be fought by Bowser whenever he takes damage from a Flifit. They can also be inhaled by him for Mario and Luigi to fight. However, there is a rare chance this will happen.