Not to be confused with Toad Town Tunnels. 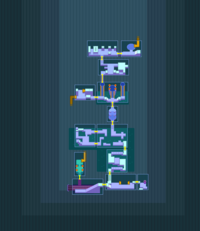 Toad Town Caves is a location found beneath Toad Town during the events of Mario & Luigi: Bowser's Inside Story. It is sewer-esque, with many ancient structures and multiple yellow Warp Pipes throughout it, leading to random parts of Toad Town and Toad Town Mall.

The caves are first mentioned by Princess Peach in the Flab Zone. She tells Mario, Luigi, and Starlow that a malicious entity known as the Dark Star was sequestered under tight security there. She also tells them that in order for Fawful to activate the Dark Star, he would need her as well. Immediately after, Peach is abducted by Fawful and Midbus, which use a special gun to pull her out from within Bowser's body.

Toad Town Caves first appear after Bowser helps the Monty Bros. drill a tunnel for Project K - an escape route for when Bowser kidnaps the Princess. He tries to venture deeper into the caves before a security system (intended to prevent access to the Dark Star) knocks him out. That triggers an event in the Pipe Yard, which allows Mario and Luigi to finally escape from Bowser's body to Toad Town Caves.

When Mario & Luigi check on Bowser, they wonder how he got knocked out. The alarm goes off once again, and it shocks Bowser once again, causing him more damage. Starlow recommends the bros. to take a different route to get to the Dark Star. If the bros. try to pass by Bowser, the alarm will go off, and they'll run back the way they came from, leaving Bowser to get shocked once again.

The bros. follows the chortling of Fawful to try and beat him to the Dark Star. Along the way, Fawful has shut the door and switched all paths out of line. In order for the brothers to pass, the player needs to activate the Blue Shell, which can be found through a pipe leading to the outskirts of Toad Town. They will meet the Koopa Paratroopa Trio, which will allow them to use the Blue Shell blocks. This enables Mario to become Shell Mario.

With Shell Mario, the bros. can hit the switches to change the block bridges vertically or horizontally. They need to use this bridges to reach the three purple blocks spread across the small platforms within the water. Hitting all three blocks will open the sealed door leading to the Dark Star. The brothers will need to change the bridge to get to the door as well.

Just pass the door, two Toads will tell the Mario Bros. and Starlow to worry about nothing. However, they are actually Fawflants, which ambush the Mario Bros. to slow them down even further. Once they defeat them, they witness Fawful destroying the barrier placed on the Dark Star, and snagging it while flying away. An injured Toad (a real one) tells them to hurry and stop Fawful and go to the Castle before it is too late.

At the end of the caves is a yellow pipe, which leads to the part of Town Toad that has a bridge leading to Peach's Castle Garden. Once the Bros. pass through that pipe, all the other pipes that were blocked off will be accessible.

There are 10 Beans in total.