Dark Fawful is the revamped form Fawful takes after absorbing half of the Dark Star's power, who is the penultimate boss of Mario & Luigi: Bowser's Inside Story and its remake, Mario & Luigi: Bowser's Inside Story + Bowser Jr.'s Journey. In this form, Fawful has greater powers and an altered appearance, featuring red glasses, a cloak that resembles the one worn by his old mistress, Cackletta, and his Vacuum Helmet that seemingly has a life of its own. 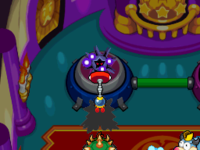 After stealing the Dark Star from Toad Town Caves and taking over Peach's Castle, Fawful and Midbus oversee the evil artifact's awakening, using Peach's power to break the seal. However, Bowser manages to enter the castle and reach the room where the two are at. After defeating the newly-powered Blizzard Midbus, the Dark Star awakens, and Fawful uses his headgear to absorb its power, transforming into Dark Fawful. Before he could absorb all its power, Bowser punches him away. 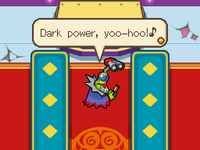 Later on, after following the incomplete Dark Bowser into Peach's Castle Garden, Bowser meets up with Dark Fawful. He sends out the Fawfulized Super Peach's Castle of Fury after Bowser, whom the latter defeats after Mario and Luigi help him to become giant to battle the castle, returning it to normal. The next time Bowser encounters Dark Fawful is when he is searching for the Dark Star so he can absorb the rest of its power. He corners him in the Conference Hall; the place where he first fought Mario back in the beginning of the game. Having enough of Bowser's meddling, Dark Fawful fights Bowser, but is defeated. 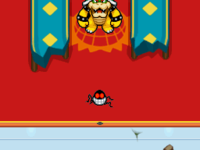 Dark Fawful, as a insectoid blob, fleeing from Bowser.

After the battle, Dark Fawful sustains too much damage and turns into a small insectoid-like blob creature. He flees the hall, though he is inhaled by Dark Bowser shortly afterwards, completing him. It is assumed that he merged with the Dark Star within Dark Bowser's body to turn into the Dark Star Core. During the final battle between the two Bowsers, the Dark Star Core helps Dark Bowser out by fully recovering and turning him giant once Bowser reduces his health to zero, though it is spat out of his body once Bowser punches his stomach. Bowser inhales the Dark Star Core, forcing Mario and Luigi to battle it, destroying its legs in order to attack its weak point; the Dark Star itself. 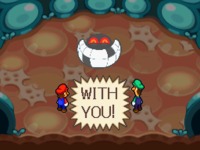 Dark Fawful before he explodes inside Bowser's body.

Once the Dark Star is defeated, it explodes and leaves Dark Bowser unstable, giving Bowser the opportunity to defeat him, returning the Mushroom Kingdom back to normal. Meanwhile, Fawful is shown to have survive, albeit very weakened. As a last ditch effort to destroy Mario and Luigi, Fawful feigns accepting defeat and explodes inside Bowser's body with a wide grin on his face. However, the explosion reverses the effects of the Vacuum Shroom and actually frees both brothers, Starlow, Toadsworth, Toadbert and many other Toads from his body. 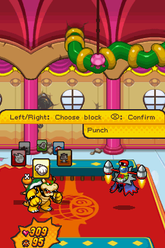 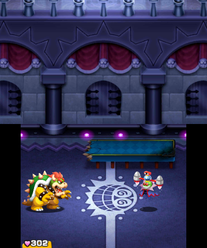 Dark Fawful's attacks vary slightly depending on whether or not Dark Fawful has been severely damaged and/or whether his headgear is still present. 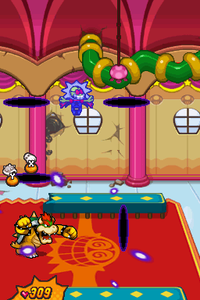 One of Fawful's attacks is to have his headgear grab the chandelier and swing at Bowser, which can be countered by punching Dark Fawful multiple times. After punching him several times, Dark Fawful will swing back behind Bowser in an attempt to ram him, forcing Bowser to duck.

Dark Fawful can use his ray gun to create an array of stars in a ring formation, with one star being a red one instead of purple. This star will then turn into the same as the other stars, and lower down to the point Bowser has to duck. Bowser must punch the correct star to blow all the others up and avoid taking damage.

The final attack involves Fawful spawning four orbs to surround him. Bowser has to time his punches and punch Goombas through the gaps in the orbs to stop the attack. Hitting one of the dark orbs causes the Goomba to fling back at Bowser, and failure to repel the attack will cause all of the orbs to attack Bowser. Later on, Fawful will spawn an extra orb that moves vertically. The star, energy ball and orb attacks may cause Bowser the DEF-Down status effect.

Bowser can use his special attacks on the Vaccum Helmet as well. If Bowser's power is high enough, Dark Fawful can be defeated without his headgear being inhaled. After he is defeated, the Vacuum Helmet will run away.