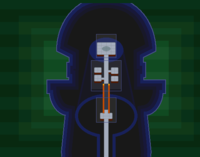 The Tower of Yikk is a location from Mario & Luigi: Bowser's Inside Story. It is a large, mechanical tower built by the late Yikk. It is capable of autonomous movement.

The Tower of Yikk is first discovered by Bowser while he is searching for the first Star Cure. On his way to Dimble Wood to confront Durmite (who is not there, unbeknownst to Bowser), he passes a propeller protruding from the surface of Blubble Lake. The Koopa King takes advantage of an allergy to a nearby plant, activating the propeller with a sneeze. This causes the submerged tower to come to life, escaping from the lake and crushing Bowser beneath a mechanical leg. Traveling to the Rump Command again, the Mario brothers activate Bowser's ability to grow to match the size of the tower. He defeats it by punching it into the lake, and then punching the tower's head, its weak spot. Bowser's strength is able to deactivate the tower permanently, allowing him access.

Inside the tower is a Save Block and a Shop Block. A short hallway and an elevator ride lead to what appears to be some sort of study. Here, the door locks behind Bowser. The spirit of Yikk appears and shows Bowser the Boo-ray Machine, which allows the Mario Bros. to pursue Durmite.

Bowser can also punch the bricks on the path to Yikk's lab and find a coin worth 100, a Star Candy, and a Drumstick Ring.[1] Additional items can be purchased from the Shop Block.

It reappears in the game Mario & Luigi: Bowser's Inside Story + Bowser Jr.'s Journey, with the same role in the main story, although it also makes a brief cameo in the side story Bowser Jr.'s Journey during the level Dad's Work, where Bowser Jr. witnesses his father's fight against it. Larry and Lemmy presumably witnessed Bowser get crushed and attempted to save him, however after Bowser grows giant, they even attempt to assist him then despite Kamek's warnings, and get injured in the process. Bowser Jr. saves Lemmy and Larry from getting crushed by the tower, but after the fight was over they lost sight of Bowser again.

Bowser fighting the tower at the lakeside.

The Tower of Yikk has various moves. One of its moves is having Mawful Moles with hammers jump on its head, forcing the player to use the flame to prevent them from restoring a chunk of its health. Another is having Crawfuls throw a Fawful Bomb at Bowser. Bowser must continuously punch the bomb back and forth, and if it lands below the tower's head, it will explode, sending the tower backwards. Its other move will involve Leaf Guys flying at Bowser with giant, ready-for-ignition bombs, which involve fireballs to take out. Sometimes, however, they will carry Mushrooms instead.

If the tower is pushed into Blubble Lake, it will attempt to fly back up on solid ground. Bowser must punch repeatedly (by touching in a small area) to prevent that from happening. It becomes increasingly difficult after each time, and after the third time it becomes virtually impossible.

If Bowser is pushed into Blubble Lake, he will be temporarily stuck and the tower will jump on his head twice for a large amount of damage.

In Mario & Luigi: Bowser's Inside Story + Bowser Jr.'s Journey, after defeating the Tower of Yikk, the tower's head will fall off and roll towards Bowser, who kicks it back at the tower. This causes the head to be placed back where it should be, though it becomes dislodged, which makes Bowser laugh at it.