In Mario & Luigi: Superstar Saga and Mario & Luigi: Superstar Saga + Bowser's Minions, Fawful uses the headgear to suck up Princess Peach's voice before the onset of the game. He uses the headgear's fireball ability to battle Mario and Luigi when they come to reclaim Princess Peach's voice; he then uses these fireballs to destroy Bowser's Koopa Cruiser, sending Mario, Luigi, Bowser and Bowser's baddies into Stardust Fields. In battle, the headgear has 18 HP.

Later, when Cackletta is defeated by the Mario Bros. in Woohoo Hooniversity, Fawful sucks her soul up with the headgear and deposits it inside Bowser's unconscious body in Stardust Fields after being launched out of the university by Prince Peasley, thus saving her from death and creating Bowletta; a transformation between her spirit and Bowser. During the final battle with Cackletta's spirit inside Bowletta's body, Fawful and his headgear are seen in one of her attacks, but in ghost form. In the attack, the headgear will shoot a wave of fire balls at both bros. If Fawful is in front of Mario, the headgear will first shoot at Luigi first, then Mario. On the other hand, if Fawful is in front of Luigi, the headgear will shoot at Mario first. 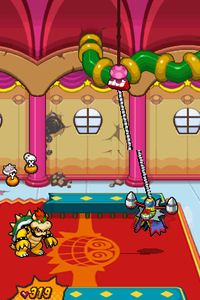 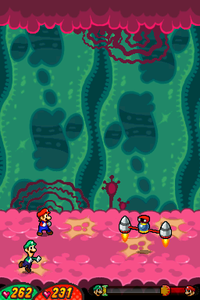 The Vacuum Helmet battling Mario and Luigi inside Bowser

During the battle against Dark Fawful in the Conference Hall, Bowser's punching and Flame Breath attacks have no effect on Dark Fawful due to his helmet, though some of his Special Attacks can damage him. One of Dark Fawful's attacks involve his helmet growing teeth and latching onto a chandelier lamp in the room to swing himself into Bowser (which is not present in the remake), which first needs to be countered with a few punches, and then ducking in his shell to avoid getting hit from behind. At times, the helmet will recover 300 of Dark Fawful's HP (500 in the remake) by exhaling purple gas at him. At some point in the fight, the helmet will detach from Dark Fawful and fly up to the top screen, where Bowser can inhale it so Mario and Luigi can fight it.

The Vacuum Helmet first inhales one of the bros's Command Blocks when battling them, preventing them from using it until the helmet is destroyed or after a few turns. It will then use one of two attacks: firing respectively-colored energy balls at Mario and Luigi from its nozzle (red for Mario, green for Luigi), which needs to be countered with a hammer, and encasing a bro in a ball with its nozzle and moving it around to hit the other bro, which needs to be countered by jumping on the ball to stop the attack, otherwise the attack will continue indefinitely until the encased bro loses all their HP, as it drains while inside the ball. After enough damage is dealt to the Vacuum Helmet, it will explode, returning the stolen Command Blocks if they have not been retrieved, and switching back to the fight with Bowser and Dark Fawful.

It is possible to defeat Dark Fawful without ever inhaling the Vacuum Helmet, and when this is done, the helmet will fly away, ending the battle.

In the remake, The Vacuum Helmet’s health draining attack is replaced with a spinning circle attack; It will encase one of the Bros inside its nozzle ball, which must be dodged by jumping, but if the Vacuum Helmet gets too close to the bro who’s dodging, the Vacuum Helmet will get faster making it hard to counterattack. This move can inflict dizziness on the brother who was encased. 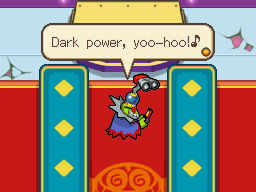 In Mario & Luigi: Bowser's Inside Story, the Vacuum Helmet introduces more functions, including being able to function independently from Fawful along with being able to suck up the Dark Star's power and Mario and Luigi's Command Blocks in battle. During the battle with Fawful in the Conference Hall, the helmet can be used as an evasive tool for Fawful to dodge Bowser's attacks, and can have its nozzle string extended to latch onto a chandelier in the room, which is used to swing Fawful around. The helmet can also release purple fumes at Fawful to recover his health. While inside Bowser and fighting Mario and Luigi, the Vacuum Helmet can charge up energy balls from its tube and fire it out of its nozzle at the bros, or encase one of the bros in a ball using its nozzle, rolling them along the ground while draining their health.