“If you want to cauthe trouble... Then you're thtupid!”
—Hermie III, Mario & Luigi: Superstar Saga

Hermie III is a giant, lisping hermit crab that appears in Mario & Luigi: Superstar Saga and its remake, Mario & Luigi: Superstar Saga + Bowser's Minions. He lives in Gwarhar Lagoon. The name "Hermie III" is likely pronounced "Hermie the Third;" the inclusion of the Roman numeral for "three" may be a pun on "tree," the object his shell highly resembles.

When the Beanstar breaks into four pieces, one of the fragments ends up in his possession. Hermie places it at the top of his shell, and manages to decorate his shell with various other ornaments with some help from fellow residents of Gwarhar Lagoon, making a Christmas tree.

When Mario and Luigi arrive, Hermie asks if the Mario Bros. came to help decorate his shell, which they refuse; he then looks at Mario's red clothes and mustache and mistakes him for Santa Claus, causing the Bros. to face-fault. One of the residents helping Hermie then notices Mario and recognizes him; when Mario confirms his identity with a jump, she calls the others over immediately, causing them to stop decorating and crowd Mario. When Luigi tries to pull him away, the trio then suddenly realize who he is and crowd him instead, asking him several questions. The lack of attention causes Hermie to lose his temper, and he attacks Mario and Luigi for interfering with the decorating.

Hermie III with Mario and Luigi in Mario & Luigi: Superstar Saga, after the battle

After being defeated, the Bros. explain the situation to the hermit crab, who reluctantly gives up the Beanstar piece, while the locals apologize for Hermie's behavior, explaining that he is "kooky." The residents then point them towards a shortcut the Bros. can use to shorten the trip back. Optionally, Mario and Luigi can later choose to make amends with Hermie III by giving him Spangle to place on his shell, and Hermie gratefully rewards them a Soulful Bros. badge. Hermie is last seen in the end credits, waving goodbye to the Mario Bros.

In addition to reprising his role in Mario & Luigi: Superstar Saga + Bowser's Minions, Hermie III additionally appears in Minion Quest: The Search for Bowser during the mission Spangle's Honey Pie, where he kidnaps Starlow and a Bob-omb to use as decorations for Wendy's "cutie battle contest." At the end of the mission, Starlow escapes and attacks Hermie III, freeing the Bob-omb and causing Hermie to leave.

Hermie III has a pair of pincers that can be targeted separately for attacks, and he often approaches the Bros. to attack by extending these claws. The claw pulses briefly before it lunges at the brother in front of it; occasionally he puts a normal pincer forward as a feint, then switches to the other. In the remake, Hermie's claws are on jointed limbs that extend forward, and each claw rears back before snapping at Mario or Luigi, with the absence of the rearing motion signaling a feint. The pincer attacks can be dodged or counterattacked by jumping, and damaging the pincers enough puts them out of commission temporarily. Hermie III also spits pink bubbles that can poison Mario or Luigi unless the Bros. pop them with the hammer.

After his first pincer attack, Hermie becomes frustrated, and increases his attack power after each attempt. If his head is attacked, Hermie immediately retaliates using his pincer attack. Once he has taken some damage, Hermie may hide in his shell, significantly reducing damage and healing himself each turn. He comes back out after restoring a certain amount of HP, along with restoring up to half the HP of each claw. If Mario uses any Firebrand-based attacks on Hermie while he hides, he will angrily pop out of his shell and yell about the brothers ruining his decorations.

In Mario & Luigi: Superstar Saga + Bowser's Minions, Hermie III gains the Fury status upon losing half his HP or more, and begins attacking faster and more often each turn like most other bosses. His idle animation changes to give his eyes the same angry look as they have in the overworld when he loses his temper.

During the fight, as an additional background element, Crabs from Mario Bros. periodically run around the battlefield; they are replaced by Huckit Crabs in the remake. 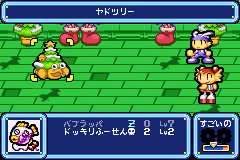