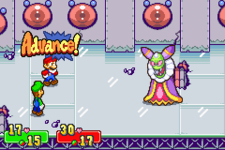 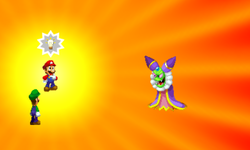 Mario thinking of an Advanced Command/Super Attack in both the original Mario & Luigi: Superstar Saga and its remake

“Advanced Commands are methods that further evolve your actions! When you learn one of these, one of you will flash, and you both will understand...”
—General Starshade, Mario & Luigi: Superstar Saga

In Mario & Luigi: Superstar Saga + Bowser's Minions, Super Attacks are completely separate Bros. Attacks that cost different numbers of Bros. Points and do not involve pressing a different button during a normal Bros. Attack to execute.

To unlock an Advanced Command for each Bros. Attack, Mario or Luigi must successfully execute a certain attack a number of times. In the remake, each Super Attack is unlocked after getting an "Excellent!" with its normal version 6 times.

Luigi thinking of an Advanced Command
Retrieved from "https://www.mariowiki.com/index.php?title=Super_Attack&oldid=3715283"
Category: