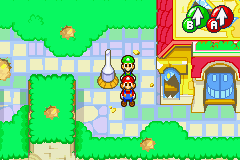 Mario and Luigi wandering the city in ruins.

Beanbean Castle Town is the central location in the Beanbean Kingdom. It appears in Mario & Luigi: Superstar Saga. In the north part of town is a castle where Queen Bean lives with her son, Prince Peasley, her ambassador Lady Lima, and many Peas. The Beanbean Castle Town has a cafe that E. Gadd owns. It also contains four shops, one for items, one for clothing and badges, an Information Booth, and a photography service shop at the right side of Beanbean Castle Gates. The player can have their picture retaken there.

Bordering or connecting locations to Castle Town include:

When Mario and Luigi first arrive, they see that the town has been attacked by Cackletta the evil witch, with Fawful. Mario and Luigi were late, since Cackletta had already kidnapped the Beanstar and poisoned Queen Bean with a Belly Blech worm.

After Mario and Luigi fought Queen Bean, and cured her with Chuckola Reserve, the town was fixed once again. However, after Mario and Luigi defeat Popple and Birdo in Teehee Valley, the town was once again destroyed by Bowletta (after she lost the Beanstar again to Luigi). The town is not seen again after Bowletta's demise. Any side-quests not finished before coming back to Beanbean Castle Town after falling from the Koopa Cruiser cannot be completed again for the rest of the game.

For a list of hidden blocks found in Beanbean Castle Town, see here. 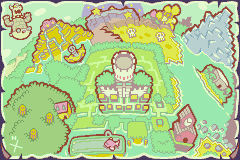