This article is about the game mechanic. For the board game, see Super Mario Level Up!.
“Wahoo! One more suit, and it's 1-Up time! I mean, level-up time!”
—Mario, Fortune Street

Level up logo from Super Mario RPG: Legend of the Seven Stars 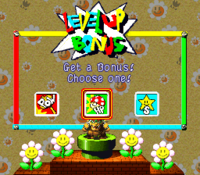 Bowser getting a Level Up

The level-up screen in Paper Mario

In both of these games, Mario levels up when he collects 100 Star Points. Instead of the requirement for leveling up increasing with each level, the number of Star Points gained from enemies decreases as Mario increases in level, eventually to the point that weak enemies stop rewarding Mario with Star Points.

At each level up, Mario must choose one of his stats to boost. If he chooses HP or FP, his maximum for that stat increase by five points. If he chooses BP, his maximum BP is increased by three points. The stats not chosen remain unchanged. Unlike most RPGs, leveling up never directly increases Mario's attack power. 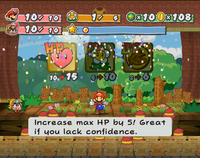 The level-up screen in Paper Mario: The Thousand-Year Door

In Paper Mario, the music played when the player levels up is an arrangement of the Grass Land theme from Super Mario Bros. 3.

Mario's partners can also be ranked up, similar to a level up, which increases their attack power and teaches them a new move, and increases their HP in Paper Mario: The Thousand-Year Door. In Paper Mario, this is done using a Super Block. These blocks are spread throughout the Mushroom Kingdom. Using one allows Mario to upgrade one of his party members to Super Rank. After he has received the Ultra Stone from Raphael the Raven, he can use Super Blocks to upgrade Super Rank partners to Ultra Rank. Each Super Block can be used only once.

In Paper Mario: The Thousand-Year Door, Merlon can level up Mario's partners, for three Shine Sprites each. One level up upgrades a partner to Super Rank. To level up the partners again, Mario must first obtain the Up Arrow. After doing so, Merlon can level them up to the Ultra Rank.

Leveling up in Super Paper Mario

In this game, the characters level up after obtaining enough points in the player's score. Level up bonuses are preset, alternating between an increase of five HP at every even-numbered level and one attack point at every odd-numbered level. All party members in this game share the same stats, excluding Bowser, who shares HP but has double attack. As is the case with The Thousand-Year Door, the maximum level the party can reach is 99. Notably, it is possible to level up twice simultaneously, unlike in the previous games.

Like in the previous two Paper Mario games, the player's HP is fully restored with each level up.

Mario's party can also permanently increase their HP and attack power without leveling up by using the HP Plus and Power Plus items. However, both of these items are very rare.

In both Paper Mario: Sticker Star and Paper Mario: Color Splash, stats such as HP and attack power do not increase via enemy battles, as in previous installments. Instead, Mario gradually gets stronger as he progresses through the story, with progressively stronger Stickers or Battle Cards appearing more often as Mario collects more Royal Stickers and Big Paint Stars. However, items that permanently increase Mario's stats also exist, similarly to leveling up from previous games in the series. By collecting HP-Up Hearts, Mario's HP increases by a certain amount (5 points in Sticker Star and 25 points in Color Splash), allowing for a grand total of 100 HP in Sticker Star and 200 HP in Color Splash. Mario's First Strike attack power also increases whenever he collects two HP-Up Hearts in the former game or a Big Paint Star in the latter game.

In Paper Mario: Color Splash, defeating enemies yields Hammer Scraps, which function similarly to Star Points from the first two games in the series. By collecting a certain number of these, Mario's paint storage grows bigger, up to a maximum of 600 points.

Mario leveling up for the first time in Mario & Luigi: Dream Team. 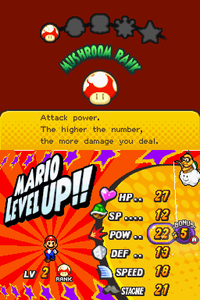 The level up screen as seen in Mario & Luigi: Bowser's Inside Story.

In Mario & Luigi: Bowser's Inside Story and its following games (excluding Mario & Luigi: Superstar Saga + Bowser's Minions), if the player reaches a certain level, they rank up, and receive special benefits.

The level system in the Itadaki Street series, including Itadaki Street DS and Fortune Street, is different. Instead of experience points, the player must collect all four Suits scattered around the board and return to the bank to level up. By using Suit Yourself cards, these reduce the amount of Suits required for a player to level up.

In Fortune Street, it is also known as a Promotion.

When a player levels up, a fanfare plays depending on which character levels up:

There is one exception: In the Practice Board, all characters use the Dragon Quest level up fanfare (even when Toad gets a promotion).

When a player levels up, they get money for their salary as follows:

The variables for determining the player's salary is:

Should a player's Net Worth reach the target amount after the salary gets added to the player's bank upon leveling up, that player automatically wins the board.

There is also a venture card that gives the player a sudden promotion without having to return to the bank.

The player's teammates in Puzzle & Dragons: Super Mario Bros. Edition can not only level up by winning battles in courses (only for those in the player's active team, however), but can level up quicker by depowering other teammates in the player's Ally Box for their XP to other allies in the Power Up spot at Toad Houses. Depowering teammates removes them from the player's Ally Box and up to five allies can be depowered at a time. Teammates getting an ally's XP receive 50% more if their attributes match. Coin Coffers and King Coin Coffers provide a significant power up for teammates using this method.

In Mario Kart Tour, the player can raise their level or multiplayer rank by racing on courses and getting high placements. Characters, karts, and gliders can also be leveled up by using level-boost tickets and obtaining duplicates of them from pipes and the Shop. As of the Battle Tour, the maximum level the player can reach is 400.

In Mario + Rabbids Sparks of Hope, the maximum level each playable character can reach is LVL 30, and LVL 5 for each Spark.