This article is about the vehicle from Paper Mario. For the court from Mario Sports Mix, see Star Ship (court). For the object in the Super Smash Bros. series, see Gunship. 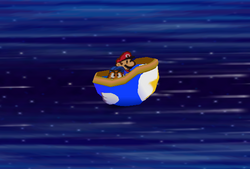 “This is the legendary Star Ship of Star Haven. Bowser is keeping his castle way up in the sky. With this ship, however, you can reach it.”
—Eldstar, Paper Mario

The Star Ship is a ship built by the Star Spirits in Paper Mario. Mario and all of his partners use this ship to travel to Bowser's Castle. When the Mario travels to Bowser's Castle, most of Toad Town's residents think it is a shooting star, and they wish for things such as: "I want Princess Peach to return," and a little Toad wishes for Shroom Cake. It docks inside the giant Bowser head in the front of the castle, which is a hangar for Bowser's Koopa Clown Cars. Mario can return back to the cruiser at any point and return back to Star Haven.

The Star Ship later appears during the parade when the player beats the game. All of Mario's party members are seen in or around the vehicle.