All members of the Fearsome 5

“We're the Fearsome 5! When we arrive, it's live at 5! We always stick together! Even when we're being bad...”
—Fearsome 5, Paper Mario

The Fearsome 5 are a group of five differently-colored young Yoshis that first appear in Paper Mario. They live on Lavalava Island with their Yoshi caretakers, and are renowned for their mischief.

The Fearsome 5 are very good friends and are constantly found together, save for when they are in the middle of playing hide and seek. They are also very mischievous and rebellious, which causes great dismay and stress for their strict babysitter, Sushie. The Fearsome 5 are found in the area of Yoshi's Village nearest to Jade Jungle and Mt. Lavalava, which contains Yoshi's Cabana and the local Toad House. When talked to, each of the Yoshi children mention a mysterious plan they are planning to set in motion soon.

After Mario returns from Mt. Lavalava, he finds Yoshi's Village in chaos, eventually learning that the Fearsome 5 had somehow managed to sneak into Jade Jungle to play hide-and-seek. The Village Leader persuades Mario and his partners to find the Yoshi children before they get hurt. After some searching, the crew eventually finds a treebound Sushie, who had been looking for the wayward children and fell into one of their traps. Upon rescuing her from the tree, she decides to temporarily join the party, and they eventually find the Fearsome 5 scattered within the jungle, saving them from harm. The Fearsome 5 decide it wiser to respect Sushie's wishes and accept their punishment, and travel back home with the group, though they still find the jungle exciting.

Later, Mario and Parakarry can deliver a letter to the Red Yoshi Kid member of the Fearsome 5 from his pen pal Dane T., inviting him to Toad Town for an adventure to Boo's Mansion with Dane and Mini T., and also includes instructions on how to play a new game. The Red Yoshi Kid has to decline the offer to go to Toad Town, and asks Mario and Parakarry to deliver a letter to them. Additionally, a letter found on Lavalava Island and addressed to Russ T. was apparently written by one of the island's Yoshi Kids, presumably a member of the Fearsome 5.[1] The Fearsome 5 also write to Mario himself at a later point in the game.

During Paper Mario's ending sequence, Sushie is yelling at the Fearsome 5 for getting up to mischief yet again when she receives an invitation to Peach's Castle from Parakarry; the green Yoshi kid of the group is also invited. The Fearsome 5 appears in the ending parade, where they partially devour Huff N. Puff and his Tuff Puffs, shocking them and disappointing a hungry Gourmet Guy, who had seemingly planned to do the same thing.

The letter sent to Mario by the Fearsome 5


The village leader wants to see you, too. Everyone does! And we want to play with you!
We bet you've been on all kinds of wild adventures! Remember to bring your stories! 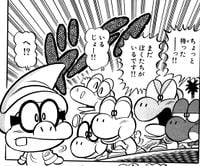