This article is about an enemy which debuted in the Yoshi franchise. For an enemy described as a "raven" in the New Super Mario Bros. Wii Prima Official Game Guide, see Crowber.

“Oracle of the Stars...Mario comes to this island.”
—Raven, Paper Mario

Ravens[1] are black, flightless birds that have appeared as both allies and enemies of Mario. Although they are called Ravens, they are actually hill mynas, and have little in common with the its namesake, aside from their black coloration and "caw" sound. The Ravens of the Mario franchise are slow-moving, wingless, and have elliptical orange beaks. Paper Mario is the only game to depict them flying. 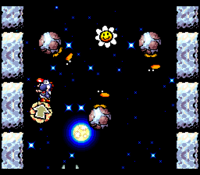 Ravens first appear in Super Mario World 2: Yoshi's Island and its remake, Yoshi's Island: Super Mario Advance 3, in the level Shifting Platforms Ahead. They can be found walking around large floating globes resembling the moon. If they run into Yoshi, they'll knock Baby Mario off his back. Yoshi can defeat Ravens by stomping on their heads, or by throwing an egg at them, but they can't be eaten. The chick variants, however, can be eaten, but Yoshi will swallow them automatically without making an egg.

A large Raven named Raphael the Raven is fought as a boss on the moon over his castle. A small version of this enemy is considered a normal Raven in the Player's Guide. 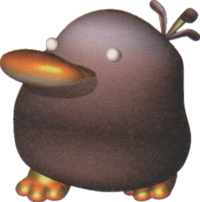 Artwork of a Raven from Yoshi's Story

Ravens make a return appearance in Yoshi's Story. In the game, they act the same way as they did in their past appearance, making squeaking noises as they walk, but are immune to all of Yoshi's attacks. They appear in the Tall Tower stage, alongside ComBats. Melons are commonly found on the rocks that Ravens occupy.

Artwork of a Raven atop a ledge in Yoshi Topsy-Turvy.

Ravens appear as enemies in Yoshi Topsy-Turvy within the Forbidden Pop-Up Book, which is where the game takes place. They stand about as half as tall as Yoshi, and are always continuously walking. They are not affected by gravity, which is a primary focus of the game. Likewise, they are able to walk along walls and across the ceiling. Sometimes, they move around wall corners, but occasionally will also simply walk back and forth. Yoshi can jump on their head to defeat them. If Yoshi bumps into the side of a Raven, he will lose three points from his Health Meter. Ravens are most commonly seen during the Tale of the Spirit of Power and the Tale of the Spirit of Kindness missions.

Ravens return as enemies in Yoshi's New Island, only in the level Eggstraordinary Terrain. Overall, they act the same as in their previous appearances in the Yoshi's Island series. However, upon eating a Raven, Yoshi will automatically ingest it and turn it into an egg.

A Raven in Yoshi's Crafted World

Ravens reappear in Yoshi's Crafted World with the exact same behavior as in previous games, where they only appear in Spinwheel Shuffle. Here, their bodies are made from upside-down balloons. One of the many costumes available for Yoshi is a small moon, complete with a Raven on the top. Additionally, five Raven blimps appear as crafts on the flip side of the level.

Ravens with Raphael the Raven.

In Paper Mario, a friendly group of five Ravens can be encountered on Lavalava Island. These Ravens (including Raphael the Raven himself) help Mario and his party reach Mt. Lavalava. This games also gives Ravens have their own language (which mostly consists of the word "caw"), although some are bilingual and can speak in human languages. The Ravens in this game also have the ability to fly by flapping their feet.

Goombario can use Tattle on four of the Ravens as one Raven is beyond Mario's reach.