Jungle Puddle is the setting of Stage 4-2 in the Jungle page of Yoshi's Story. It is a river running through the Yoshi's Island jungle and divided into two halves. The first half is a boggy area with a Mr. Eel swimming along the river and Bomb Berries growing on the trees. 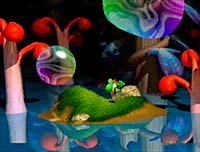 An early screenshot of Jungle Puddle.

The second half is probably the more dangerous area. Blurps are native to this part of the river and will attack their prey in relentless pursuit. Red Blurps act very much like their previous appearance as Boss Basses from Super Mario Bros. 3, as they will leap at a Yoshi and eat it, eliminating the Yoshi in one hit. Blue Blurps will spit water at its prey in an attempt to knock it into the water similarly to a Spray Fish, where it will then swallow the Yoshi whole, just like its red counterpart. To pass this level safely, the player should keep running on the platforms as high above the water as possible. Unless the player is trying to get all 30 melons and/or secrets, they should pass the entire second half of the level without lingering.

The hidden Heart Coin letter for this stage is R.

In a pre-release version, the Jungle Puddle had a darker design, with large bubbles, large plantlike structures sprouting from the water in the background, and even Bone Dragons.

The jungle lake was swimming with hungry fish called Blurps. The Blurps would swim and jump, but, mostly, they liked to eat and eat. The Yoshis didn't want to become fish bait, so they quickly swam away.