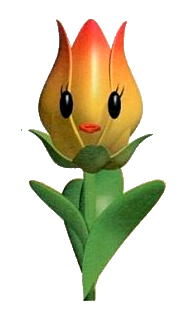 Artwork of a Tulip

“Taste the Tulip to turn Yoshi into an egg.”
—Message Block, Yoshi's Story

A Tulip, or Turbo Tulip,[1][2] is a special type of flower in Yoshi's Story. When a Yoshi attempts to eat a Tulip, the Yoshi is turned into a Yoshi's egg. This form can be used to reach other places that are otherwise inaccessible. The player aims the egg by using the Control Stick and releases it to launch the Yoshi. While being launched, the egg bounces off any walls, floors, and ceilings it hits. If the egg simply moves up a little from the ground, it is possible to aim it in midair and bounce it up repeatedly. After enough time has passed, the Yoshi returns to its normal self. Additionally, the player can press

to cancel the form and change the Yoshi back to normal. After the Yoshi eats the head of the flower, the flower's head grows back.

In Mario Golf for the Nintendo 64, various Tulips make a cameo on the golf course Mario's Star.