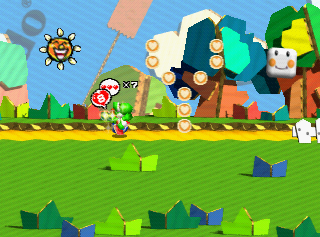 Super Happy Yoshi in Treasure Hunt. As a result of the transformation, some coins in a "Y" form appear.

Super Happy is a status attained by a Yoshi that appears in Yoshi's Story. It is activated whenever a Yoshi eats a Heart Fruit. Super Happy Yoshi is invincible and stronger and has a longer tongue, an infinite supply of eggs, and a better Flutter Jump. On an additional note, whenever a Black Yoshi or a White Yoshi is in Super Happy mode, the Yoshi's mobility while he uses the Flutter Jump is increased drastically.

If a Yoshi performs a ground pound, he pops all bubbles onscreen, Shy Guys are turned into the current Lucky Fruit, and peppers turn into coins. Sometimes when he transforms, some coins are revealed. While a Yoshi is Super Happy, the Smile Meter, which represents the Yoshi's health, laughs and is completely filled. Super Happy Yoshi's theme music is a rock arrangement of the current level's music.

If a Yoshi transforms as a result of collecting six melons, usually from a minigame, some coins in the shape of a letter are revealed. Doing this in all 24 levels of the game causes a secret message—"YOU ARE YOSHI'S GREAT PARTNER"—to be spelled out.

Super Happy Yoshi lasts for only a limited time, but its effects wear off immediately if a Yoshi eats anything like a blue Tehee Butterfly, a Black Shy Guy, or a pepper or if a Yoshi is eaten by a Piranha Pest. Moving to a new area that causes the page to turn also ends the effect early. Lastly, the form's invincibility does not protect the Yoshi from fatal hazards, such as Blurps, pits, lava, and pistons.