In Super Mario World, Blarggs (also named Munchers[1]) as fairly rare enemies, encountered primarily in the Vanilla Dome. When Mario or Luigi approach a Blargg on a Skull Lift, the eyes of the Blargg will be visible before they dip back into the lava, moments before lunging. Yoshi is capable of jumping on them and, with some difficulty, eating them. The player can also opt to Spin Jump if lacking a Yoshi, although this method only prevents one from taking damage if landing on a Blargg or its eyes. They are mainly seen in Vanilla Dome 3, though they make their first appearance in Vanilla Dome 1 and later reappear in Chocolate Secret. It is possible for Invincible Mario to defeat one in Vanilla Dome 1 before falling into the lava. Caped Mario can also defeat it with a Body Press attack before falling into the lava. These methods reveal a glitched sprite.

As shown by graphics in the source code of pre-release builds, Blargg went through many design iterations of varying sizes, as both a dinosaur like in the final and as a shark.[2]

A Blargg from the Super Mario World animated series

Blarggs, though never referred to as such onscreen, appeared in two episodes of the Super Mario World animated series. 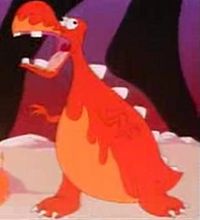 A Blargg revealing its body

In the episode "The Wheel Thing", Mario and Luigi, having been banned to the Lava Pits, begin attempting to cook a pizza over a fire. The smell from this cooking pizza causes a Blargg to emerge from a nearby lake of lava and begin to chase Luigi, attempting to eat the plumber. Luigi is rescued from being devoured as Mario swoops down and saves his brother as Cape Mario.

In a later episode titled "Mama Luigi", a Blargg makes a brief appearance. Luigi and Yoshi, while running away from a pair of Tyrannosaurus Rex, use a Blargg's head as a stepping stone to cross a river of lava.

A Blargg, which lived in water, appears in one of the bad endings in Dinosaur Dilemma, eating Mario if he falls into a pit while fleeing from some Mega Moles. 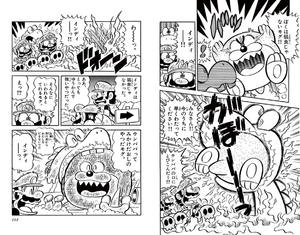 A Blargg appears from the 9th chapter of the first volume as the chapter's main baddie.

After a friendly Mega Mole leads Mario, Luigi, and Yoshi towards the underground exit, they travel on a Lava Lift where they are immediately attacked by the Blargg, who was given the order to kill the Mega Mole as well due to his betrayal. The Blargg attacks the protagonists by spitting fire. Mario tries to hurt it with a fireball, but ends up making it stronger due to its fire affinity. Mega Mole, meanwhile, cowers in fear and uses Mario as a shield and, when Mario asks him what a Blargg's weakness is, he reads the Super Mario World manual and finds out that Blarggs cannot be defeated. When the Blargg is about to kill Mario, Luigi, and Yoshi, Mega Mole jumps on the Blargg, attacking it and landing right in its mouth, clogging it. The Blargg falls back into the lava, and while Mario, Luigi, and Yoshi mourn the death of their friend, they meet Mega Mole on shore, where he managed to survive from the lava and with Blargg's mouth still stuck on his forehead, pleading to be put back into the lava. In this shot, the Blargg's body is show: the neck is the entire body, and it has little arms and legs.

Several Blarggs make a minor appearance in Nintendo Power's Super Mario Adventures comic, appearing in the lava flooded basement of Bowser's Castle. These Blarggs are used as stepping stones by Mario to reach a Warp Pipe leading to another part of the castle. 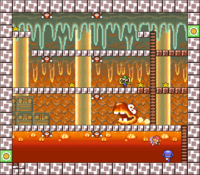 A Blargg appears in Honō no Dōkutsu, the fifth stage of Mario & Wario. It is nearly identical to its appearance in Super Mario World, but unlike its previous appearance, it is docile and merely part of the scenery. 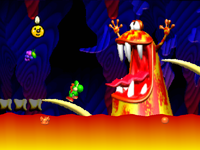 A Blargg, in Yoshi's Story

In Yoshi's Story, Blarggs are altered, being larger, and given small arms with a blob-like appearance. They appear in only one level, Stage 2-2: Blargg's Boiler. In this game, Blarggs do not harm Yoshi when touched, although Yoshi gets a forceful push from them. While they cannot be harmed, Yoshi can throw an egg at one to force it back into the lava. There is also one Blargg unaffected by eggs which will briefly pursue Yoshi.

Due to their large size and blobbish appearance, these Blarggs appear to be visually based off of the Gargantua Blarggs in Super Mario World 2: Yoshi's Island. However, they do not have eyebrows.

Their artwork from Yoshi's Story is reused as a stamp in Mario Artist: Paint Studio.

In Super Paper Mario, a Sammer Guy named Raging Blargg can be fought. Additionally, in the Japanese versions of Paper Mario: The Thousand-Year Door and Super Paper Mario, the "-tail" dragon bosses Hooktail, Gloomtail, Bonetail, Fracktail, and Wracktail instead have names that are based off Blargg's Japanese name, Unbaba.

Blarggs are referenced in Mario & Luigi: Partners in Time, where they are mentioned by Kylie Koopa using "in a Blargg's age" as a figure of speech.

A Blargg with unfinished textures in Super Mario 64

Blarggs, with their appearance resembling how they appeared in Super Mario World, were originally going to appear in Super Mario 64 as enemies in Lethal Lava Land, Bowser in the Fire Sea, and even Wing Mario Over the Rainbow as they were found in the game's coding. With GameShark codes, the player can make them appear on the level, being fully functional and with a complete model (aside from a lack of eyes).

Blargg
Tribe: Dinosaur clan
Disposition: Mischievous
Game appearances: World
Watch out for magma spray
A flaming dinosaur in the sea of magma. It is usually hidden, but when you approach it, it will show its face and attack you. It is an invincible enemy that cannot be defeated by any attack. Before it appears, it makes a splash, so use that as a warning sign.

Bio: 溶岩に生息。マリオを確認したあと、大きな口を開けて襲いかかる。[8](Lives in lava. After checking on Mario, it opens its large mouth and attacks.)