"Born to Ride" is the seventh episode of the Super Mario World animated series.

In the Dome Castle, Mario and Luigi are trying to install a sink made of bamboo piping in the place; all the tools Mario uses are small animals. While Mario and Luigi are discussing their pipe installation and how they could possibly make a shower, Princess Toadstool appears and greets them and reminds them to just work on the sink for now. Deciding to show the Princess the new sink, Mario and Luigi are surprised to see it doesn't work. Venturing outside, Mario and Luigi find the source of their unworking sink: Yoshi has been munching on the recently laid water pipes. 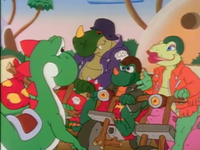 Yoshi with the Dino Riders.

Becoming furious at Yoshi, Mario and Luigi yell at him and tell him to stay out of their way while they're on the job. After this scolding, a disheartened Yoshi decides to run away and leave Dome City. As Yoshi, taking what little possessions he has, leaves Dome City, he encounters a rabid Caterpillar, which he quickly gobbles up. After eating the caterpillar, Yoshi is approached by three motorcycle-riding dinosaurs. The bikers introduce themselves as Duke, Lulu, and Rockman, the Dino Riders; after introductions are done, Yoshi asks the Dino Riders if he can be a biker like them. At first Duke, the leader of the Dino Riders, is hesitant, but when Yoshi mentions he knows Mario and Luigi, Duke gladly lets Yoshi join, planning on using him to get to Mario and Luigi so he can capture them and turn them over to King Koopa for a reward. 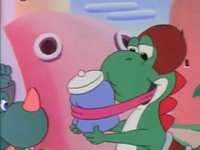 Yoshi about to eat the paint before Duke hurts him.

Deciding that Yoshi needs to pass a "test" before joining the Dino Riders, Duke orders Yoshi to vandalize a dome-house with paint. Yoshi is about to eat the paint until Duke whacks him on the head, and he vandalizes the house with a smiley face instead, displeasing Rockman and Lulu. Yoshi is then given a Bob-omb but hesitates. Lulu takes his arm and forces him to throw the Bob-omb inside, revealing to be a Smell Bob-omb upon detonation. After doing these deeds, Yoshi is made an "official" member of the Dino Riders by Duke and given a biker helmet and jacket. After giving Yoshi these items, Duke tells Yoshi to tell Mario and Luigi to meet him at the Tar Pit Milk Bar, saying that himself, Rockman and Lulu are going to "teach the Mario Bros. a lesson" for "disrespecting" Yoshi earlier.

Back at the Dome Castle, Princess Toadstool asks Mario and Luigi where Yoshi is; the two reply that they haven't seen Yoshi since they scolded him earlier. A shocked Princess Toadstool scolds the heroes for getting mad at Yoshi, reminding them that he's still a baby and doesn't know any better. Mario reassures her that Yoshi will come crawling back and will forgive them. Then Yoshi, in biker garb, appears to tell Mario and Luigi about how he joined the Dino Riders and about how Duke wants to meet with them. Princess Toadstool agrees with this idea, believing it to be Mario and Luigi's chance to straighten everything out. The three then set off to see the Dino Riders. 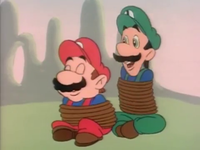 Mario and Luigi after being tied up.

Inside the Tar Pit Milk Bar, Mario and Luigi are ambushed by the Dino Riders, while Yoshi waits outside. After several minutes of waiting, Yoshi becomes curious as to what is taking so long and looks in a window and hears about the Dino Riders' plan to hand Mario and Luigi over to Bowser and how they are going to eat him and the Mario Bros. after they get their reward. A remorseful Yoshi rushes off to get Princess Toadstool to help him rescue Mario and Luigi.

Mario and Luigi getting away from the Dino Riders.

Getting the Princess, Yoshi manages to track down the Mario Bros. and Dino Riders, who are camped out in a field in Lava Land. Duke steals a dish from Rockman to give to Mario and Luigi as their last meal, but after realizing it's Goomba Quiche, they lose their appetite. Jumping from his hiding spot, Yoshi frees Mario and Luigi by chewing through the ropes that bind them and eats the Goomba Quiche thrown at him as weapons. Stealing Lulu's motorcycle and knocking the motorcycles down to slow the Dino Riders down, Mario, Luigi, Yoshi, and Princess Toadstool take off with the Dino Riders in pursuit.

Using a Triangle Block, Mario, Luigi, Princess Toadstool, and Yoshi drive up a cliff, but even though Rockman accidentally destroys the Triangle Block, the Dino Riders are still following them, with Rockman going after Mario and Luigi and Duke and Lulu going after Yoshi and Princess Toadstool. Using a pair of Magic Wings, Yoshi manages to evade the Dino Riders, while Mario, as Fire Mario, manages to take out Rockman's motorcycle, plunging the biker into some nearby lava. Duke and Lulu subsequently end up crashing into a wall and get covered in coins after crashing into a cactus while Mario, Luigi, Yoshi, and the Princess escape into a nearby Warp Tube. Yoshi is reluctant to leave his motorcycle and outfit behind, but he decides to do so after choosing not to be a biker. After they go down the pipe, the Dino Riders arrive and look down the pipe to witness the loss of their possessions. Once back home, Mario and Luigi are able to finish working on the sink, but then Yoshi walks in eating bamboo again. The plumbers and Princess Toadstool assume that Yoshi has been eating the plumbing again, but Yoshi declares that he's just joking with normal bamboo. The plumbers then try out the sink and are delighted to see that it works. 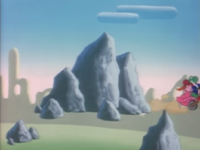