"Ghosts 'R' Us" is the fourth episode of the Super Mario World animated series. The episode is erroneously spelled "Ghosts Are Us" on MRA Entertainment's DVDs. This episode's name is a pun on the name of the store Toys "R" Us. This is also the second episode of a Mario cartoon to have a title be a pun on the name Toys "R" Us, the first being "Crimes R Us" of The Adventures of Super Mario Bros. 3.

This is the only episode that did not appear in the single-disc DVDs of the series (Yoshi the Superstar or Koopa's Stone Age Quests), but instead being released as part of the Mario Bros. Mix DVD.

Mario, Yoshi, Luigi, and Princess Toadstool are searching the Enchanted Forest for the missing Oogtar the cave boy. As the group searches, Yoshi becomes increasingly uneasy in the haunted forest. After reassuring Yoshi that there are no ghosts in the forest, Luigi bumps into a robed being.

Apologizing to the figure for bumping into him, Luigi is warned by Princess Toadstool that the figure is "the most terrible Koopa Wizard in the entire Dino World, Wisenheimer". Yelling that his name is really Wizenheimer, the Koopa Wizard ends up scaring Luigi and Yoshi, causing the latter to run away panicking. 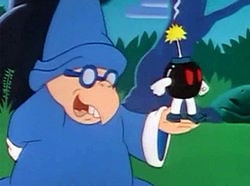 Eventually, Yoshi stops running and begins to worry about his friends and the trees and bushes roar and grab at him. Before Yoshi can track them down, though, a large Tarzan-like holler scares the dinosaur. Terrified, Yoshi runs off, only to be chased by a "monster" who was, in actuality, the missing caveboy, Oogtar.

While running away from Oogtar, Yoshi nearly bumps into a wall of Piranha Plants sticking out of Warp Pipes. Yoshi easily jumps over these Piranha Plants; unfortunately, Oogtar is not as lucky and ends up becoming stuck in a Piranha Plant's mouth. After begging for help, Oogtar is saved when Yoshi slurps up the Piranha Plant chewing on Oogtar.

After Oogtar thanks Yoshi for saving him, Yoshi explains to him that Mario, Luigi, and Princess Toadstool have been kidnapped by a Koopa Wizard. Hearing Yoshi's story, Oogtar decides to aid him in his search for their friends.

In the basement of the haunted house, Wizenheimer begins to taunt the now shackled Mario, Luigi, and Princess Toadstool. After Princess Toadstool asks Wizenheimer why he is holding them captive, the Koopa Wizard's only response is, "Because I'm an evil Koopa Wizard, I don't need a reason to be mean and nasty. It's my nature!". Wizenheimer then leaves his prisoners, whose only hope of escape are Yoshi and Oogtar.

While looking for their friends in the forest, Oogtar and Yoshi are attacked by an angry Caterpillar. A panicking Oogtar is forced to drag Yoshi away, the latter having gone into shock due to the caterpillar's monstrous roars. While fleeing from the caterpillar, Yoshi comes across a ? Block, which he hits, causing a pair of Magic Wings to pop out of the box; leaping into these wings, Yoshi gains the power of flight. With Oogtar on his back, Yoshi flutters up into the air and swoops down on the attacking caterpillar and with his sticky tongue, gobbles it up.

Mario, Luigi, Princess Toadstool and Oogtar trapped in Wizenheimer's castle. Note that Mario and Luigi's gloves are the same color as their skin.

With the ability to fly on his side, Yoshi easily finds the Warp Pipe his friends were forced down and with Oogtar, he ventures down it. Coming out of the other end of the Warp Pipe, Yoshi is horrified to discover that Wizenheimer lives in a haunted house. Deciding to leave Yoshi behind, the overconfident Oogtar begins pounding on the door of Wizenheimer's haunted house. Coming to see what the commotion was, Wizenheimer is met with Oogtar, who demands to be brought to the house's dungeon to see his friends. An amused Wizenheimer agrees to take Oogtar to the dungeon, then subsequently zaps the caveboy into chains in the dungeon.

Realizing it is up to him to save his friends, Yoshi, with the use of a Triangle Block, barges into the house. Inside the house, Yoshi is attacked and chased by a gang of ghosts. After a long chase, Yoshi finds himself in Wizenheimer's basement, face-to-face with the Koopa Wizard himself.

After almost being blasted by Wizenheimer, Yoshi, after getting some advice from Oogtar, uses his tongue to slurp up Wizenheimer's wand, leaving the Koopa Wizard powerless. Yoshi's subsequent belch from eating the wand shoots out a magical blast that frees his friends. The now free Mario defeats Wizenheimer by jumping on his head and sending him tumbling into the bowels of his basement.

Even with Wizenheimer defeated, Mario, Luigi, Princess Toadstool, Yoshi, and Oogtar are still trapped in his haunted house. It is only after a failed attempt by Oogtar to break down the basement door that a magic key is found. Using this magic key, the gang are transported back to Dome City, safe and sound.

Yoshi with his saddle's colors being inverted.