A Power Balloon, sometimes shortened to P Balloon[1] or P-Balloon,[2] is an item introduced in Super Mario World. When touched, it inflates the playable character and allows them to float through the air like a balloon. 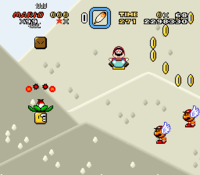 In Super Mario World and its reissue, Power Balloons can be found in four levels: Donut Secret 1, Donut Secret 2, Forest of Illusion 1, and Tubular. The item's effect is to make whoever picks it up swell up and become Balloon Mario or Balloon Luigi, causing him to hover in the air. He will gradually float upwards if not moved by the player, but he is capable of moving in any direction for a limited amount of time. During this time, Yoshi cannot be ridden. Mario or Luigi starts to puff in and out when the item is about to wear off, and when it does, he returns to normal size and drops out of the air. The level Tubular in the Special Zone requires the player to continually pick up new Power Balloons to maintain flight while they make their way across the level. If Mario or Luigi passes through a Giant Gate while under the effects of the Power Balloon, he will gain a bonus Super Mushroom.

The Power Balloon in the source code of the prototypes for the original SNES game originally was going to be red before it was changed into beige in the final game.

Power Balloons were added to Super Mario Maker 2 in the version 3.0.0 update released on April 22, 2020, available only in the Super Mario World style. In this game, the Power Balloon item floats in place rather than floating away to the right, and it is now bright yellow rather than beige. The character's appearance also changes more drastically when the character obtains the item, with Mario's and Luigi's overalls and Toad's and Toadette's undershirts turning yellow with a letter "P" on them (the "P" is on Toadette's dress in her case), similar to what the P-Wing does. The functionality of the Power Balloon form was also altered, allowing the character to be fully in control of which angle and direction they are floating towards, as opposed to the original game's simple vertical and horizontal mobility. The time limit is also removed. In the nighttime ground theme, Power Balloons fly around in circles, eventually disappearing.

The Power Balloon also appears in volume 6 page 111 of Super Mario-kun, being featured in a single chapter. It shows itself coming out of a ? Block.

In The Super Mario Bros. Movie, Power Balloons can be seen inside the antiques shop.[3]