This article is about the shells of the Spiny enemy. For the blue variant that sometimes has wings and is a Mario Kart item, see Spiny Shell (blue).
Not to be confused with Spiky Shell.

“The best way to break Hard Blocks is with a Spiny Shell, but I don't have one. Could you go find me a Spiny Shell?”
—Purple Toad, Super Mario Maker 2

A Spiny Shell is the Spiny counterpart to Koopa Shells. Their uses vary by game series - in platformers, they generally cannot be touched from above without damage, even when empty or the Spiny inside is unconscious, but when upside-down, empty, or in other series, they can serve as a usable item.

In Super Mario Bros. 3, Spiny Shells made their debut. Unlike future appearances, Spiny Shells still act as a hazard when upside-down, just as they do right-side up. Thusly, Spiny Shells cannot be picked up, thrown, or kicked, as Mario and Luigi will still take damage if they touch them. Notably, in the Game Boy Advance version, immobile upside-down Spiny Shells are harmless, and can thus be carried, thrown, and/or kicked.

In Super Mario Maker, Super Mario Maker for Nintendo 3DS, and Super Mario Maker 2, Mario is able to wear Spiny Shells like Buzzy Shells on his head like a helmet and become Spiny Mario (except in the Super Mario 3D World style). They are created by shaking a Spiny in the editor mode to make it hide inside its shell. Spiny Shells defeat just about every enemy outright on contact; this includes even the tougher enemies, such as Thwomps and Boos, but it only deals a single point of damage to Bowser per hit in Super Mario Maker, but three points in Super Mario Maker 2. When ducking as Small Mario, walking enemies will bounce off Mario as if he was a wall. Spiny Shells can break Blocks like Brick Blocks and Hard Blocks. However, the Spiny Shell is also a double-edged sword in that it's able to break ? Blocks; this in return, means that Mario won't be able to acquire the contents of the ? Block if he hits it from below.

The Spiny Shells can be kicked and act similarly to any other shell that slides along the ground, meaning they can harm Mario on contact while sliding unless Mario touches one from below, in which he will wear the shell. Despite idle Spiny shells being empty, they can still harm Mario, due to the spikes, unless the player holds the dash button when touching one, during which Mario will pick it up, regardless of how he approached it (except in the Super Mario Bros. style).

Once wearing the Spiny Shell, Mario cannot take it off willingly unless he takes damage, or collects a Mystery Mushroom. However, a glitch does exist that allows Mario to wear the Spiny Shell while using the Costume Mario power-up, but it can only be executed in the Course Maker. The glitch was fixed as of version 1.30. In edit mode, Mario can be shaken to remove the Spiny Shell, as well as reverting back to Small Mario if any other power up was given to him.

In Super Mario Maker 2's story mode, Purple Toad dons a Spiny Shell after Mario completes the job Spiny Shell Smashers; he uses it to destroy Hard Blocks under three nearby ? Blocks, which lets Mario access them and unlock the Superball Flower for use. He then wears the shell for the rest of the story, even during the staff roll. 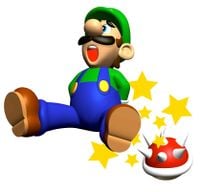 Luigi hit by a Spiny Shell

In Paper Mario and Paper Mario: The Thousand-Year Door, Spinies use their shells to attack by lunging at Mario. Using a POW Block or Quake Hammer will flip them over, allowing Mario to jump on them and lowering their defense. In Super Paper Mario, Spinies will retreat into their shells to attack, and can also fall from the ceiling to attack from above. In Paper Mario: Color Splash, there are pits in Kiwano Temple that are filled with spikes that resemble Spiny Shells. In Paper Mario: The Origami King, at Shangri-Spa, a Spiny is spinning rapidly under a pile of leaves. When Mario destroys the leaves, the Spiny exits its shell and explains that it was trying to trim the leaves from the inside.

In Super Mario Strikers and Mario Strikers Charged, Spiny Shells, also known as Spiked Shells[1], act as items. When fired, they will shoot towards the other players, acting very similar to the Green Shells. However, instead of just hitting one player, then disintegrating, the Spiny Shells will keep going. This can be compared with the Giant Green Shells. They continue to bounce around the stage until, at long last, they wear out, and get destroyed on their own. The more effective counterpart of the Spiny Shell, is the Giant Spiny Shell. Spiny Shells usually come in groups of three. In these games, Spiny Shells have a hexagon-plated carapace rather than the usual smooth one.

In Mario & Luigi: Bowser's Inside Story and its remake, Spike Blops wear Spiny Shells on their heads.